Enjoy on your Andalucian bike tour this remarkably diverse and one of the most fiesta laden towns in this shimmering landscape that there is. 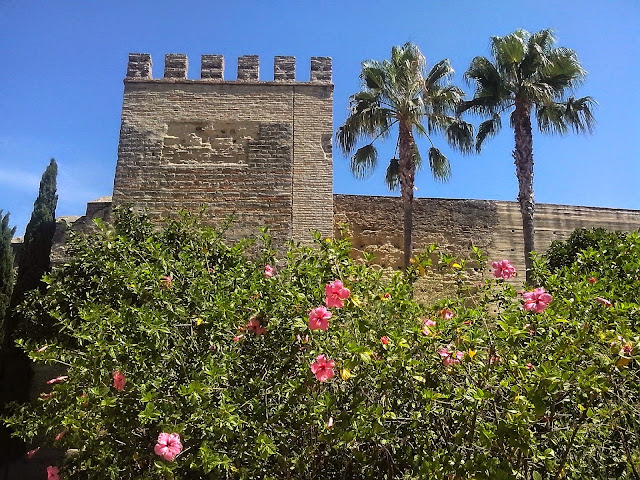 The fields, now golden and russet toned, are spread around the rocky outcrop of which the medieval town and cathedral rests atop with the trickle of Rio Gualdalete. The swaying palms lining the sun soaked plazas and the emerald green jacaranda that blossom into an alluring indigo only serve to remind you that we are closer to Africa here than Spain´s capital, Madrid. Here is a real slice of Andalucia, the very deep south, with its innumerable barrels of well loved and delicious sherry, prancing Andalucian horses, with their  powerful chest and long wavy tails and manes, and solid Moorish culture pedigree all under the southern sun.  A terrain full of the dichotomy of pious, polite and princely versus the pulsating and passionate strains of flamenco (said really to have its origin’s in the barrios here) is a most enjoyable place to soak in the atmosphere. 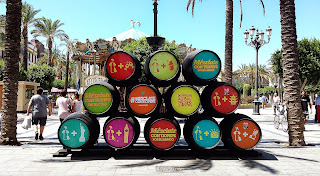 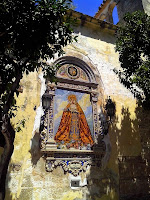 For those who bypass this town, in favor for Seville or Malaga, you miss a really special essence of Andalucia which is seen in its monuments. The hulking cathedral, the Catedral de San Salvador, a mix of Gothic, NeoClassical and  baroque, with some tremendous flying buttresses stretching out into the streets and which was built on the old mosque. Other Moorish sites still remain, underlining the fact that this town was a stronghold in the 700 years of Arabic influence that existed here. The Alcazar fortress from the 11th/12th century even preserves a small mosque (which was converted into a chapel upon the Reconquest) and a very unique octagonal tower.

It was in 1264 that King Alfonso 10th, rode triumphantly into Jerez, proclaiming part of the Christian Monarchs territory and awarding the town the right to commemorate this reconquest by holding 2 ferias, one in April and the other in Sept. If you ever visit Jerez during either of these 2 dates, than hold on to your hats, don´t think that the prosperity of this town automatically brings a reserve and seriousness to life as these people know how to party. 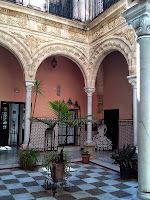 The two real cultural identities that this town has is flamenco, which if you are keen, can be visited and seen in 1 of the town´s 17 peñas / flamenco clubs and at the Interpretation and Library collection of the Centro Andaluz de Flamenco, housed in an interesting 15th century building that has some fine Mudajar (artisans trained in Moorish style) designs. Walk right in and hear the strains of those practicing or teaching classes. There is a Flamenco festival here every February and you will probably hear it in some way, out of car windows, in cafes, but for the real thing, you have to stay up late (and that is saying something in this late night culture) and wait for the duende (magic essence) to happen and happen it will. The “bulería”, the very dramatic fast paced, often improvised upbeat flamenco form was developed here and today is most looked forward to by Spaniards in a performance as it offers the musician and dancer the most freedom to explore this unique art form. 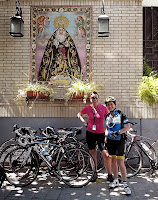 The other is present in the fields you pass on our way around this region, the pawing inky silhouettes on tawny sun baked pastures, the Cartujana horse (a cross between the Andalucian breed and the Arabian).  Originally, travelling salesmen from England, France and Belgium came to Jerez selling items and bartering in exchange for wine. These fairs were quite agricultural in nature and thus the proud horses breed in the region, centre stage. The mix of Spanish, Arabian and Berber blood lines has made these equines (called the Cartujana) strong, easily trained and extremely attractive with long flowing manes and tails. Generally a smaller horse than other breeds standing 15 o 16 hands high they often are born grey with bays or brown or black being rare and often featured in many of European oil paintings and bronze sculptures depicting triumphant horseback generals. Realizing the significance of this commodity, in the 17th century, Vueltas Escaramuzas a la Gineta (riding exhibitions) were organized with these horses and in 1955 the first week of the horse was featured with the patronage of the famous sherry producer, Alvaro Domecq.  In the 1970s the creation of the Royal Andalucian School of Equestrian Art occurred and today the School is in the 19th century palace, el Palacio Recreo de las Cadenas where you can see the horses dance and fly daily.  There is also an excellent carriage museum here and as well, being Andalucia, there of course is a bull ring in town, with a museum dedicated to the Toro. 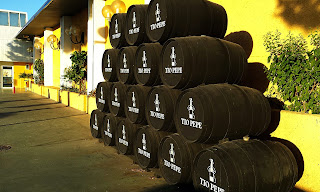 In the “good” ole days where the cyclists use to shun water in favour of harder things, they would have certainly appreciated this area for it is the world´s biggest sherry producer.  Sherry is fortified wine and grows especially well in a chalky dry soil (called Albariza) such as Jerez has. The Palomino and Pedro Ximénez are the primary grapes used to make Sherry and you will see row upon row of grapes drying out in the sun around town.

The 2 main types of Sherry are Fino, a very fine dry straw coloured tipple which everyone drinks chilled and Oloroso, dry but richer in flavour and higher in alcohol content (18% compared to Fino at 15%). However there are also other popular types such as Manzanilla (dry, light), Pedro Ximénez (ultra sweet dessert Sherry), or cream sherry (rich and mixed with Oloroso and PX). Of course, as you may have guessed, the word "Sherry" is an anglicized pronunciation (first heard in 1608) of  “Xeres” (Jerez) the town´s old Moorish name. Before this it was known as assack from the Spanish word, “saca” or extraction. It is also a legal denomination and every bottle labeled as “sherry” must come from the area known as the Sherry triangle between Jerez, Sanlúcar de Barrameda and El Puerto de Santa Maria.  Come fiesta time, locals and visitors alike imbibe a lot of the excellent drinks on offer with a charming little glass cup called a catavino and if the town doesn´t warm up with the natural sunlight it gets a profuse amount of, then this will enliven the streets for sure! 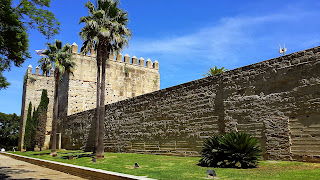 Come and explore this most evocative part of Spain on our Olive trails – The Deep South tour.
November 12, 2014
Location: Jerez, Cádiz, Spain