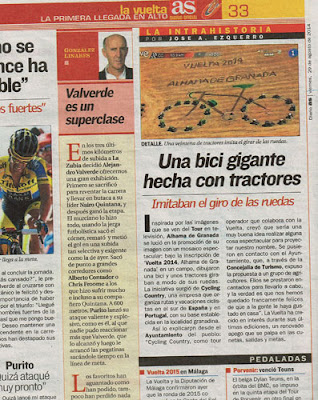 AS NEWSPAPER AND INTERNATIONAL TV (AUGUST 2014)

This article was about the special aerial display of field art that we helped organise with the people of our village of Alhama de Granada to welcome La Vuelta a España 2014 as it passed through. The display was featured on LIVE tv and transmitted internationally to 55 countries. It was later seen in La Vuelta 2014 celebratory finish film extravaganza in Santiago de Compostela, projected onto the town hall.
August 27, 2014
Location: 18120 Alhama de Granada, Granada, Spain