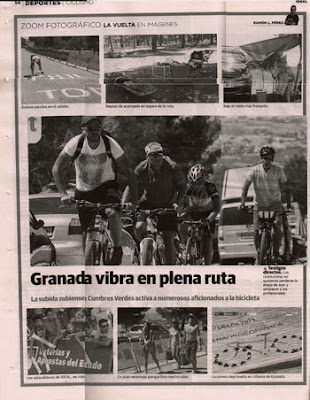 We made the Travel Supplement´s main cover story, “Light your own Olympic Flame” which picked the best action holidays for those wanting a sporting challenge.

Our Lakes, Mountains & Sea tour was featured as being a trip that will bring you up to speed on the bike. A great route through Sierras and Summits to end seaside – it´s one of our favourites too.

Cycling – Rising Star As your pedal power increases, so should the gradients. The smooth mountain roads of Andalusia get the balance between epic and doable just right.

The self-guided Lakes, Mountains and Sea tour from Cycling Country (0034 958 360 655, www.cyclingcountry.com) winds its way from historic Alhama de Granada, over sierras, through almond forests, past old castles and classic coffee stops, occasionally joining the route ridden by Mark Cavendish in the Vuelta. As a relief to those throbbing quads and glutes, day six is a long superfast grin inducing descent from Bermejales lake, between the peaks of Almijara National Park, down to the Med at Almuñécar for beers and a bathe.