INDIVIDUAL TIME TRIAL IN MÁLAGA´S CENTRE!
It was a great first day at La Vuelta - Our group rode the 8kmTime Trial through Malaga´s cultural centre, then saw how fast the pros do it!   Rohan Dennis (BMC Racing Team) is the first leader of La Vuelta 2018! The Australian champion covered the 8km course in 9’39’’, 6 seconds faster than Michal Kwiatkowski (Team Sky) to become the first non-European rider to win individual time-trials on all three Grand Tours! Very exciting.

The national race of Spain, 83 years old this year (73rd edition), is one of the three stalwarts in the European cycle race calendar alongside the Tour de France and Giro d´Italia. This year, the 3254.7 km (2022.3miles) race (21 stages) has 46 summits to crest, spread over 5 mountain stages. With two individual time trials, this year’s overall winner will require a diverse team around him to succeed. Only a handful of stages are obvious for the best sprinters, so once again, La Vuelta is always tailor made for those who like to be climbing out of the saddle, which in the South of Spain, is easy to provide.

It´s first port of arrival is the coastal city of Málaga, one of the sunniest and better weather spots in Europe.  Warm temperatures in the summer and a mountainous landscape surrounding, it is always a lively and dramatic start for La Vuelta.  Starting off with an Individual Time Trial this year, in the late afternoon, is a wonderful way to enjoy this delightful city centre. The Grand Depart of La Vuelta 2018 will be the Spanish tour’s 30th visit to the capital city of Malaga. The organizers really do love it.  The first one took place in 1936, during La Vuelta’s second edition and it is always a pleasure to return here. 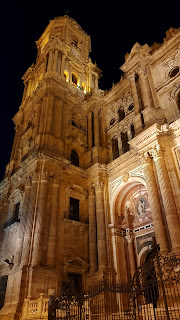 Each year an estimated 8.5 million tourists visit the Costa del Sol - 35% of these land at Malaga’s Pablo Picasso airport and most head straight to the beaches at the package holidaying Meccas of Tormelinos, Fuengirola and Marbella. But just a few minutes away you’re in for a shock, as Málaga’s city centre is exceedingly Spanish and surprisingly untouched by the influence of the coastline visitors.

Ancient roots secure this city with an exciting past and you virtually stumbled onto a 2nd century B.C. Roman amphitheatre sunning itself on a quiet back street behind the Alcazaba, an exceptional Moorish Citadel perched over the town.  Originally settled by Phoenicians as a trading port and called Malaka in the 800 years before Christ, it went from hand to hand through battle, onto the Romans, Moors and then Christians.  After the devastating expulsion of Moors from the city by the Christians in the 15th century, it declined, not helped by severe aerial bombardment in the Civil War and population persecution in Franco’s day.

This viewpoint is also one of the best places to take photos of this impressive spreading city situated on the Med. Recently, the city has worked hard to bring its somewhat grimy reputation into check with beautifying reformations to the port promenade and new paint jobs, and in the bright sunlight which lights the crimson potted geraniums in so many iron wrought balconies, this bloody history seems far off. Especially when the whole city is on holiday for the annual August festival or Gran Feria de Malaga, and laughter, fun and copious drinking is foremost on everyone’s minds. Spectacular fireworks display a festival of booming fire colour and light began the year´s Feria, and the city residents, the Malagueños do not let up in the nine days of festivities, which commemorates the 1487 recovery of the city from the Moors and is spread out through the city like a long jubilant winding Congo line. The 2018 Vuelta had a later than usual start, on Saturday August 25th, to avoid overlapping with this annual Feria (festival) with its Grand Depart in Malaga.

Close to the Individual Time Trial circuit, walk into the shady gardens of the massive conglomerate Cathedral and connecting Iglesia Del Sagrario to escape the throng.  An interesting construction with some appealing lifelike sculptures, it is very close to the new (and wonderfully stocked) Museo Picasso (its 2004 fanfare opening was attended by King Juan). Malaga also has some lovely local beaches, plazas, promenades and viewpoints (notably the Gibralfaro Castle, which has a nice café terrace).

After standing in the streets, watching those Pros race by in the setting sun,  the nicest way to spend the evening before your evening meal is to stroll in the cool with the Malagueños in the Paseo del Parque, a Mediterranean delight of overhanging palms.

Malaga's Centre For Contemporary Art / Centro de árte Contemporaneo, Calle Alemania s/n, 1-   Works of art on display from 20th - 21st century artists such as Andy Warhol, Anis Kapoor and Louise Bourgeois.   It is housed in what used to be an old market. A good collection of contemporary pieces for you to ponder and reflect on.

Alcazaba, Plaza de la Aduana, Alcazabilla 2. –  An imposing structure overlooking the city, the Alcazaba was built as a fortress by the Arab settlers of Malaga between 1057 – 1063. Good place to walk around and enjoy the view majestic view below. You can easily spend half a day in the Alcazaba.

Gibralfaro Castle- Camino de Gibralfaro, 11 ;  This castle, near the Alcazaba is surrounded by pine and Eucalyptus trees and overlooks Malaga city. A lot of walking up and down stairs.
Roman Theater; Located at the foot of the Alcazaba, this is the only remaining Ancient Roman ruin in Malaga.

Malaga Cathedral, Calle Molina Lario, s/n,; An impressive Baroque facade and with an ornately decorated interior. The outside of the Cathedral may not be as stunning as the one's in Seville but the architecture and grandeur of the inside may just take your breath away. 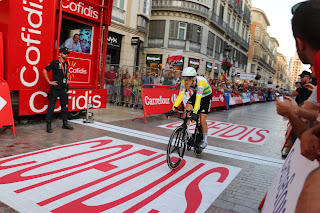 Museum Of Glass & Crystal, Plazuela Santisimo Cristo de la Sangre, 2:  A collection of over 2000 pieces of glass from different periods and cultures. The place is a bit hidden and away from other frequently-visited tourist spots, but is well worth the visit. The entrance fee comes with a guided tour, by the owner himself, who still lives there. The enthusiastic and entertaining tour will make you want to know more about glass and crystal as the owner's enthusiasm is very contagious. A pleasant surprise is this museum that many have rated it as one of the best museum experiences they've had.

FOR SHOPPING
Atarazanas Market – A great place to shop for local produce. The experience offers a good insight into traditional Spanish markets.
Calle Larios – Difficult to miss once you're in the old district. This street paved with marble is where you will find trendy shops from high street brands.  This is where the Time Trial will be heading for to charge up those last hundred meters to the Meta!