The 3254.7 km (2022.3miles) race (21 stages) has 46 summits to crest, spread over 5 mountain stages. With two individual time trials, this year’s overall winner will require a diverse team around him to succeed. Only a handful of stages are obvious for the best sprinters, so once again, La Vuelta is always tailor made for those who like to be climbing out of the saddle. Which is why today´s tough stage to the Lagos de Covadonga is always a special and exciting one.


In many ways, the race is looked forward to here for a unique reason this year, as it is a centenary celebration for the area. In 2018, Asturias celebrates a unique triple celebration, centred around Covadonga and the area. Amazingly, three centenaries are taking place at once: the Coronation of the Virgen de Covadonga, the creation of the Montaña de Covadonga National Park and the 13th centenary of the origins of the Kingdom of Asturias. As the tourist office of Asturias tell us, "Three Covadongas in one: the historical, the spiritual and the natural, in an extraordinary combination which turns Asturias into a universal destination.” and to be sure, whether it is rain or shine, the area always looks amazing on the tv coverage with its cinematic grand landscape either  shrouded in fog looking mystical or in bright sun shine looking majestic. 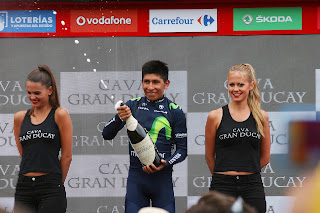 The Pros start the day off with a ride up the short 1st category (7.1km @average 7.7%), "El Fito" to reach a 360 degree viewpoint of stunning vistas. The Pros will be doing it twice today!  Descend along the green Asturian valleys, to the nearby quaint village of Cangas de Onis with its famous Roman bridge, the symbol of Asturias. The afternoon is all about the epic ascent to the Lagos de Covadonga, a hors category thriller where the race today ends in the high lakes of the Picos.  The last time used was in 2016´s Vuelta with Nairo Quintana keeping the red jersey and winning this stage and continuing on until Madrid with it.

Many a past Vuelta has been decided here.  The Etapa Reina (Queen Stage) in 1983 was this twisting climb which begins by the basilica of Covadonga, and rises to the glacial lake of Enol – the hardest km being a muscle shrieking grind at 15% gradient (nicknamed, “La Huesera” or Bone yard).  It is this moment that most Pros decide whether to attack here or shortly after.
It was here Bernard Hinault (5 times Tour de France winner and many more palmeres) got dropped in 1983 but near the lakes the incline eases up a bit which allowed him enough fight to make it back into the game and win that year´s Vuelta.  Although this Vuelta for Hinault was a turning point as he and his manager rowed publically about his drinking wine during the tour, later ending their working relationship and would give his domestique Laurent Fignon (7th place Vuelta) a chance to develop into the great Tour cyclist he would become.

This was the majestic backdrop to the 1985 struggle between Columbian rider Lucho Herrera who attack Pedro Delgado and Scotsman Robert Miller, with finally Delgado leaving all in his dust and putting an additional 4 minutes onto Sean Kelly´s time and 13 minutes for Big Mig Induráin. 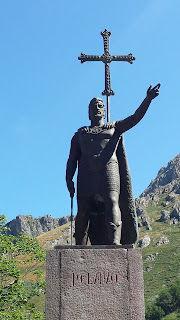 Aside from all the cycling duals which have taken place here through the years, Covadonga also happens to be one of the most visited sites in the whole of Spain with literally hundreds of thousands of visitors (and not just cyclists) each year making the pilgrimage to the shrine of Pelayo, instigator of the Reconquista. It is thus considered the birthplace of Christian Spain. Pelayo, the Spanish form of the Latin name, Pelagius, was the founder of Asturias, who was originally a Visigoth page or bodyguard of King Roderick

Stories obscure Pelayo´s true lineage, but his leadership in starting the Reconquest (the reconquering of Spain by the Christians from the Moors starting in 711), with the battle of Covadonga, surviving many of the Moorish versus Christian battles and his escape from Cordoba in Andalucía in order to rally his troops in Asturias is legendary.  He later set up a small kingdom in his native area of Asturias around Cangas de Onis and is considered the founder of today´s province. His and his wife´s remains were transferred to the “Holy Cave” (Santa Cueva de Covadonga) when he died in 737. 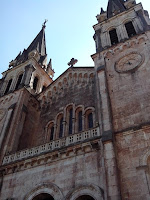 In fact so respected is the name, a lot of Spanish military units call themselves, “Covadonga” and there was a Spanish battleship called Pelayo.  The actual meaning of "Covadonga" is from Latin “Cova Dominica” - "Cave of the Lady", because the place is dedicated to the cult of the Virgin of Covadonga, where Pelayo is supposed to have fled during the Moorish battles, and had left an image of the Virgin Mary. This 16th century image of the Virgin was taken from Spain during the civil war and found in the Spanish Consulate in France in 1939.

Thus the mystical and sacred nature of this truly beautiful area is a pretty fabulous backdrop for the cyclist to conquer today. 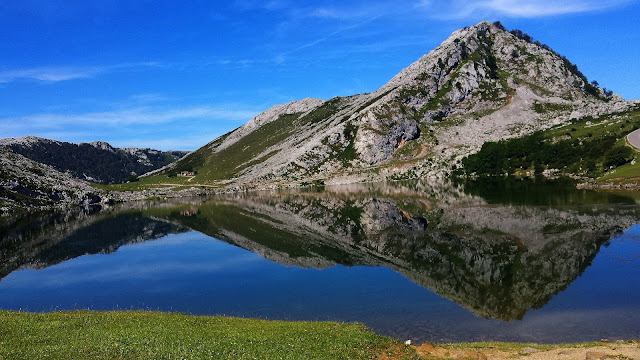