TOP SPOTS TO BIKE: SEVILLA, the City of Fresh Arias 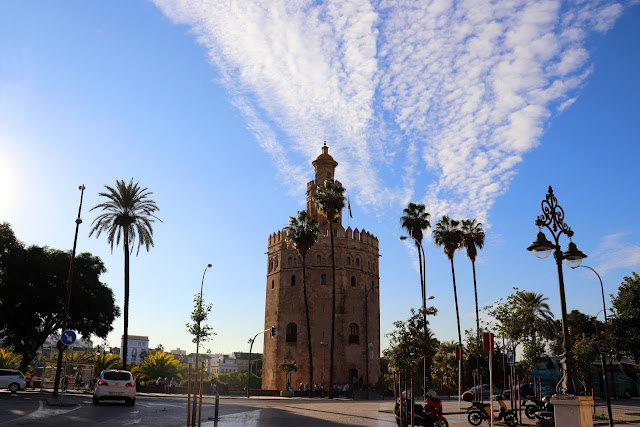 Planning a cycle trip to Spain?

The sun in southern Spain is so strong and clear that minuscule details are transformed into inspiring works of art in the cut glass crystal light. This is perhaps the first sensation on arriving in the Andalusian capital of Seville.  The second is the heady scent of orange blossom that makes this refined city entrancing in its wafting oriental perfume. If that is not enough, as myths go, it is said Hercules, the muscle man favoured by the gods, also founded it.

And with its most famous sexual stereotypes of Carmen and Don Juan singing from its streets, its heritage of 500 years of Moorish rule and love of a good gypsy guitar and castanet clapping flamenco dance, it is without a doubt, the model of archetypal Spain, the kind you expect to see on postcards. 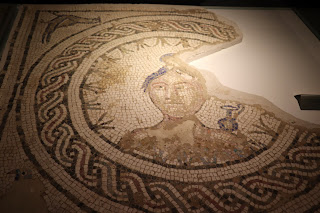 Set on the banks of the Guadalquivir River, which flows out to the ocean, Seville is perfectly situated for trade; the Phoenicians, Carthaginians and Romans frequented it. Even if the Herculean myth isn’t true, the great and powerful still grew from Seville with two Roman Emperors, Hadrian and Trajan being born in Itálica (the settlement camp on Seville’s outskirts) and Julius Caesar stopping to stay awhile. From these noble beginnings, it became one of the most active cities of learning and advancement in the Moorish empire from 712 until its fall in 1248 to the Christians. However, with Christopher Columbus’s encounter of America, a zenith of exploration occurred and soon after it became the centre of the globe most literally, as a royal decree in the 16th century declared all New World destined ships should pass through Seville. It still is a doorstep for international events hosting the 1992 World Exposition and the 2004 Davis Cup Tennis matches. 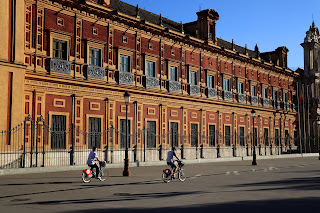 The modern day world is already acquainted with Seville intimately, owing to the world’s greatest sex role typecasts which arise from its streets. ‘El Burlador de Sevilla’ dramatized in 1630, and attributed to Gabriel Téllez, enacts the story of licentious Don Juan’s seduction of a Sevillian girl, his murder of her father and his subsequent downfall to hell. Thanks to the retelling of the story in Molière’s ‘Don Juan’ (1665), Mozart’s opus ‘Don Giovanni’ (1787) as well as Lord Byron’s ‘Don Juan’ it has become part of popular culture, as does that of the feisty gypsy Carmen, who is killed by her jealous ex-lover Don Jose. Made famous in Georges Bizet’s opera (which at the time was seen as quite risqué), the tale was originally told by the French writer Prosper Mérimé, after an Andalusian duchess told him a rough version in 1835. Carmen is synonymous with Spanish fiery temper and has been portrayed often from the 1954 movie ‘Carmen Jones’, to an MTV version featuring Beyonce Knowles.  Despite this, it was only in 2004 that saw the city host the opera ‘Carmen’ for the first time using the dramatic original surroundings of the Plaza de España, the Parque María Luisa, and the 14,000-seat bullfight arena. A wonderful success, hopes are to make it a more permanent feature in the city’s choral calendar. 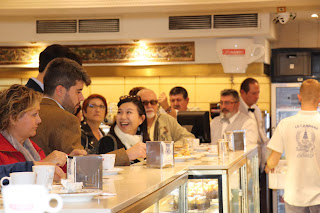 Today finding Carmen’s workplace, the elaborate stone tobacco firm, gives a thrill of excitement and sure enough the student body that crams into what is now the University of Seville campus is still an attractive bunch but now in hipster beards, Ipods and piercings!

Your visit to the Seville is inconceivable without a ramble over to the Giralda and Gothic Cathedral.  Like a block of stone, it sits in Seville’s heart (both figuratively and spiritually).  The Giralda bell tower (named after the 16th century weather vane giraldillo placed on top), built in 1184 - 96, is a former minaret with its Moorish ancestry visible in its arches and Arabic flourishes. The belfry still has 25 bells (the oldest being the clock bell made in 1400). The 76 metre high minaret was once crowned with four golden balls and was said to be seen from 40km away. A trip up above the soaring buttresses and inner courtyard of orange trees is easy by walking up the ramps (making it easier for the Muezzin to traipse upwards – sometimes riding a donkey, to call Muslims to prayer 5 times a day), round and round until you find yourself under the great bells at the summit. And with this the view from the top, a staggering panorama that sees the river a glistening trail into the horizon and the private and fragrant roof top gardens exposed to all. Below, the romantic horse drawn carts become mere shadows, the geldings pawing the ground inky silhouettes in the sunlight. 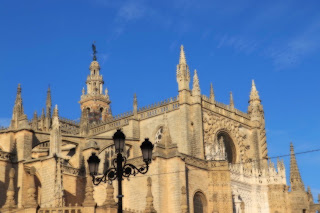 The 15th century Cathedral itself is the world’s biggest in volume, as certified by the ‘Guinness Book of Records’, embossed official paper and stamp inside the front door. Escaping from the outside liquid light, you step over the smooth stone floor and under the massive wooden doors that frame the cathedral entrance, and your eyes momentarily stab, as the pupils dilate swiftly. Inside, a shady smokiness is lifted by the presence of the soaring roots of stone buttresses and you tend to whisper around the many chapels holding their mysterious tokens. With its great works of art it really is one of Spain´s best art galleries in addition to its architectural and spiritual importance. 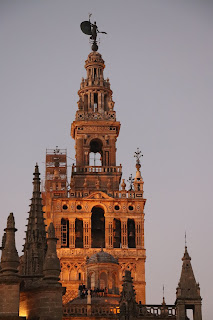 Most memorable is the supposed tomb of Christopher Columbus. Four bearers, each representing the kingdoms of Castille, Aragon, Leon and Navarra, lift the casket containing Columbus’ bones. The mystery surrounding this tomb continues as after Columbus’ death in 1506, the body was moved around throughout Spain, the Dominican Republic and Cuba, and with subsequent mislaying of remains no one was entirely sure if this tomb contained the explorer or not until very recently when National Geographic did some DNA testing on the bone slivers which remain there. It is he!

Escape the solemnity of the Cathedral and try lounging in one of the bustling cafés lining the streets nearby. In the sun you can sip your steaming cup watching the Sevillianos go by with rustling shopping bags whilst the waiter scurries between tables. After a short break, of which in Seville you can’t help but not pass up so bountiful are the cafes, tapas bars (the city supposedly created the tradition of tapas) and patisseries, resume your tour around the city walking to the Alcazabar, Seville’s lovely Arab palace. 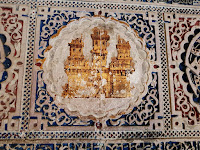 This is a showplace for Moorish craftwork and contains amongst other impressive sights, the Salon de Embajadores (the intricate dome built in 1427) and the alluring Patio de las Doncellas (a bounty of complex plasterwork arches).

Commenced by the Almohad leaders in the 13th century, when Seville’s Moorish leadership was overthrown in 1248 it was left. In 1364 Pedro 1 decided to build his home inside the palace and had it decorated in the Mudejar style that accompanied the Reconquest (use of the Moorish style and built by converted Moors). It is still today used by the Royal family of Spain and considered their home here and thus is one of the oldest, continually lived in, Royal residences in the world. 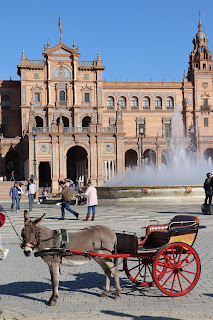 From here ramble down to the Plaza de España, past the tree lined Avenida del Cid, where grimly, heretics and witches were burned in the Medieval Spanish Inquisition. The Plaza is a pretty complex, its mosaic tiles glowing showing scenes in pictorial form of Spanish cities. You may recognize it from movies such as Star Wars Episode II: Attack of the Clones (2002), Knight and Day (with Tom Cruise and Cameron Diaz), David Lean´s Lawrence of Arabia and even Game of Thrones episodes. Across the road from here is one of the most charming attractions, the Parque de Maria Luisa, developed for an exhibition in the 1920s. Here arm and arm couples stroll around the waving palms and through avenues of bowing trees. Startlingly, you come out to a paved garden area where the most amazing Moorish styled buildings await.

Now the Costume and Archaeological Museums, they sit separated by a small pool, both resplendent in their Art Deco touches and Arabic design. Here Seville seems to set itself a part just even that little bit more as the gardens are full of a pretty white pigeon breed that attractively passes itself off as a dove, and which flutter like white handkerchiefs at a bull fight all over the park’s verdant.
It surely is an elegant place to visit with a history that spanned the globe. Start our Enchanted Andalucia tour here and discover this beautiful city today!