Cycling across Europe gives an appreciation of its great diversity.

Notes from a trip in 2001 and the birth of Cycling Country Bike Tours! 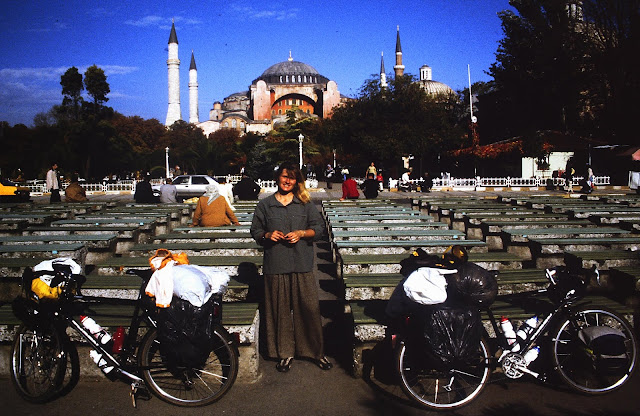 “Mad, you must be mad!” everyone exclaimed, before we left to cycle from London, England to Istanbul via ”bandit infested” Eastern Europe. However, finding myself on our first day, sprained knee elevated, 110km from London, practising German phrases for “Please, more codeine,” was not the illustrious start hoped for. My feelings grew that maybe it was actually a crazy idea to travel over 5,600km by bicycle? Transcending economics and territory, the bicyclist is a humble creature, and while cycling with copious luggage makes you a novelty and somewhat vulnerable, the off the beaten track experiences are worth it, and yes in all eleven countries travelled, everyone thought us nuts but we loved it!

A long week later, we sailed from Dover, torrential rains obscuring its white cliffs, and for the first days in Belgium’s flat expanse my patient partner and  puncture repair man Geoff made audible sighs as knee enabled us to travel 20 km a day rather than our planned 85km+. As we passed through once War torn Flemish villages, this snail’s pace permitted us to ponder our mortality (or someone else’s in Geoff’s case, I am sure). “I would have volunteered to walk across the floors of hell barefooted to get out of there,” said Canadian Private J. Pritchard about W.W.1 Flanders.  Today, councils argue about highway construction over battlegrounds. 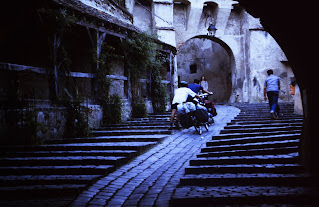 Through the Ardennes, the Vosges and the Black Forest Mountains we arrived at the Donauradweg (literally Danube cycle path in German), a paved route of 609km extending through Germany, Austria, Slovakia and Hungary.  Following the Danube, Europe’s second largest river, as a tiny drip in Germany, it progressed to a swollen flood, obliterating our path and then transformed into a stately river flowing past Budapest’s elegant Parliament.

Cycle touring in the Rain

Unfortunately rainfall was monumental, with twenty-five days of solid wet. After seeing soggy Bavarian grape vines, trundling in bone chilling damp by Ulm’s cathedral, and visiting Vienna’s coffee houses in cold drizzle, we became obsessed with staying dry. Our hopes lay in Hungary, a country reported in receiving much of Europe’s sunshine, and miraculously after arriving, the sky cleared and initial visions bathed in golden light. Passing Magyar horsemen and the Puszta (Great Plains), we arrived in stately Szeged near the Romanian border.
Fearing the worst, we stocked up on everything, including contingency plans in case of roadside muggings. After entering Romania we spent our first night on a campsite beside roaring highways, where gap toothed sex workers stood lonely but offered us enthusiastic waves as we dragged our sodden bikes into the site.
The Hard History of Romania 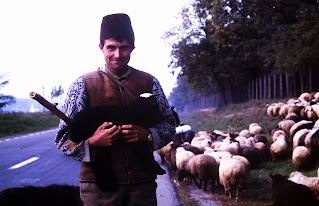 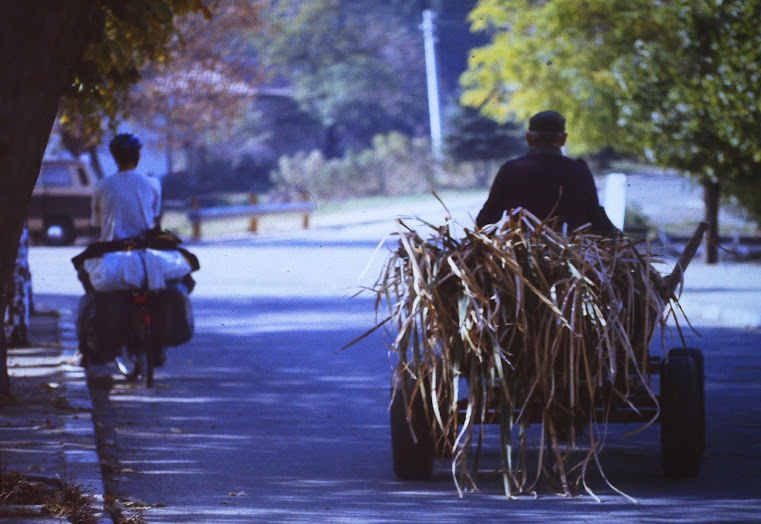 The legacy of former Communist leader, Nicolae Ceausescu was still evident. His village razzings and re-housing of residents in bleak concrete apartments were epic in fashioning Romania’s face.  Even Bucharest was 30% destroyed so to build his monstrous Palace of the People (second largest building worldwide). Evidence of his megalomania, it contains vast purposeless rooms with two tonne cut glass chandeliers. “Incredible…….obscene…….people were starving,” were comments heard on our tour of the place.

The country is still going through difficult growing pains, though with the generosity of its people you would never suspect it.  Grapes, walnuts, and tiny glasses of “Tuica”, their potent plum brandy were pushed our way, always with much laughter.  However, many despaired about the future. “We may look happy, but inside we are worried,” said one young woman.

We often saw Roma (gypsies) begging or trolling along in wooden wagons pulled by horses, babies clutched by young mothers wearing layers of bright clothing, their sun darkened skin setting off a gold tooth or earring. Distrusted, disenfranchised and often persecuted they kept to themselves. Environmental records are as abysmal with continuous incidents of Danube cyanide poisonings.  We visited Sinaia’s dusty under-funded Bucegi Nature Reserve Museum, its young curator Ioama Vlad, told us how people desperately kill protected species for money.  We had already been offered Edelweiss flowers, (illegal to pick), by young children who make brisk trade with tourists. 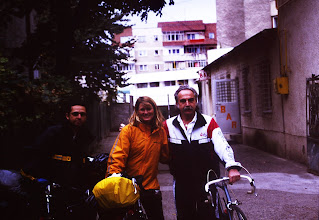 We criss-crossed the Carpathians, the country’s “backbone”, while the shepherds and farmers shouted greetings as we cycled by. Their pastures punctuated with 15-foot haystacks and villages like medieval paintings, the smoky, wooden carved homes, traditionally dressed folk and horses protected from the evil eye by jaunty crimson halter tassels.  Romanian rural lives, slowly changing with tourism, will no doubt follow the cities of Brasov, Sibiu, and Sighisoara where visitors already swarm, their money lured by the Dracula theme.

Cycling Through Bulgaria on Bike

On a bitter November day we crossed the Danube again at the border of Ruse, Bulgaria.  Our knowledge of the Cyrillic alphabet immediately tested as we deciphered road signs. With some teeth gritting climbs, we cycled the Balkan Range, where ancient legends tell the “North Wind” was born and culminating with the Shipka Pass (1306m), a battle site of Alexander the Great’s. Stretching plains lay below us where 3rd century B.C Thracian burial mounds dotted the landscape like gigantic molehills. 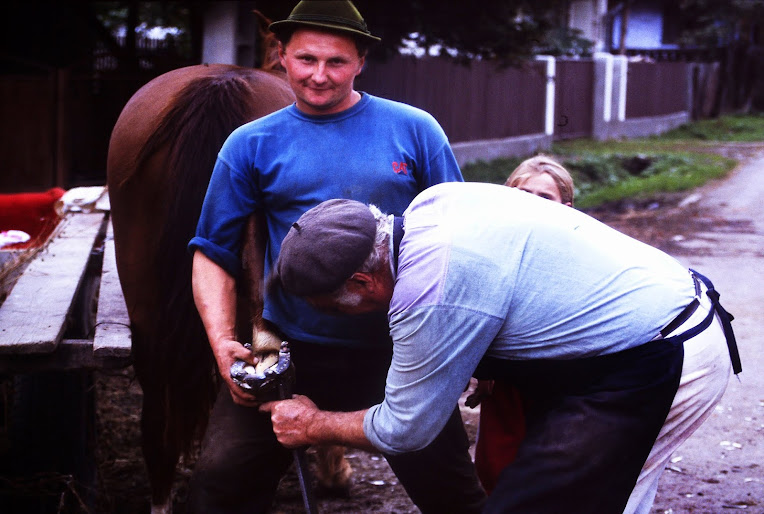 Bulgarians seemed more reserved, but we never left a town without people waving and the food without exception; fresh and filling for hungry cyclists – huge salads with salty feta, bean ciorbas (soups), warm breads and pastries.

Arriving in Turkey on Bike - Watch for Turkish Dogs!

Following a deserted wind strewn Black Sea coast, the beech forests closed in until we crossed the Turkish border. Instantly different, its landscape harshly rugged, we cycled in at sunset to Kirklareli as the Müezzin called prayer, the streets hectic in Ramadan (the Muslim holy month) with busy veiled women and lively children.

After countless steep hills, punctures and encountering many territorial huge Kangol sheepdogs we found ourselves on the alarmingly massive highway system into Istanbul. Here inshallah (god wills) and belief of kismet (fate) reign and we panicked in the kamikaze traffic.  Finally, with much gratitude to all gods, I saw the crumbling ancient city walls and towering minarets of the Hagia Sophia and Blue Mosque, our final destination.

Religious or not, I did give a few thanks to all Gods involved.

Tips for Long Distance Cycling
Pack light,
Buy detailed local maps and up to date gps maps
Have a sturdy, but comfortable bike and try it out before you go!

Be Brave, have Fun, Trust!

Airlines often need cycles boxed now and some have a “bikes fly free” policy or at least a minimal charge but they often need to know ahead you are checking it.
Insurance policies may not cover cycle touring (ranked close to sky diving).
Again confirm you and your bike are protected. 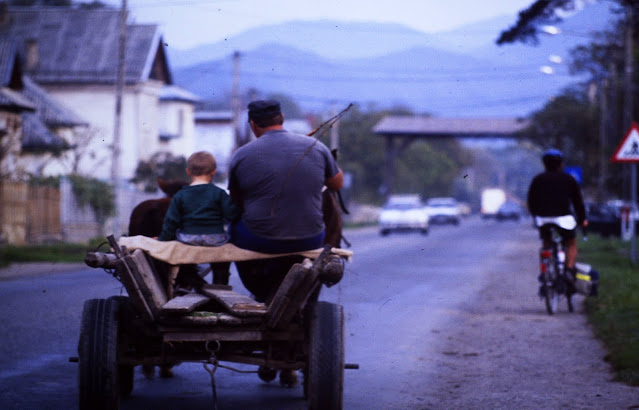