TOP SPOTS TO BIKE: RONDA, Cyclists and Non-Riders love it!

Thinking of biking in Andalucia with non-cyclists in your group?

Don´t let that stop you planning your cycling vacation to Spain. Visit the little town of Ronda because with excellent cycling routes in the area and many monuments to visit, it is a great cycling base for a couple of days and has enough things to do for non-riders. 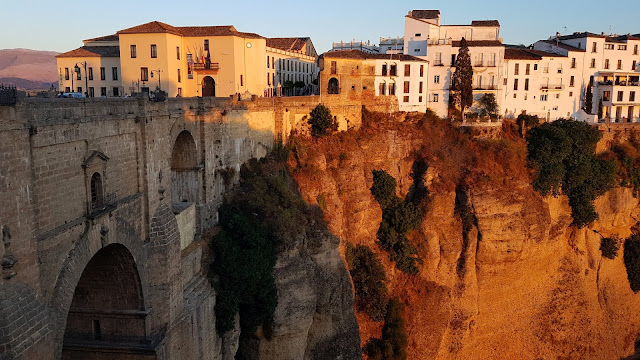 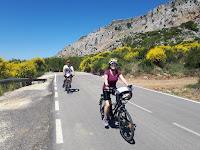 If you are a fresh air fiend, Ronda will endear you even more so, with its mountainous sierras, excellent for walkers and cyclists. This lonely wild landscape gave rise to the 18th century banditry of which the romantic writers and painters of the 19th century became intrigued with and entwined in their artistic watercolours.  So if you are keen to get out on the bike, than come and stay a couple days and make some cycling loops around Ronda.  One of the first bike routes, is a simple out and back up to the Puerto de Viento (13km/362m Ascent), which is just outside Ronda and is a good little climb to warm up with. More of a challenge is to drop down through the forests to the village of El Burgo (27km /523m Ascent) and come up the other way (705m Ascent), that is a great little spin with some awesome views. 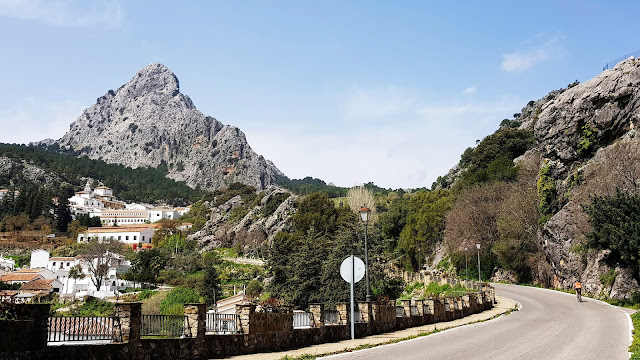 Another superb little loop for the cyclists in Ronda is a quick out and back to Grazalema. A cyclists playground in Andalucia, the main road there is busy but with good shoulder and once you are there you will enjoy the great climbs of Puerto de los Palomas (and awesome Spanish climb for any cyclist) and Puerto del Boyar, again a beautiful climb up to test your metal on very quiet roads and picturesque setting. 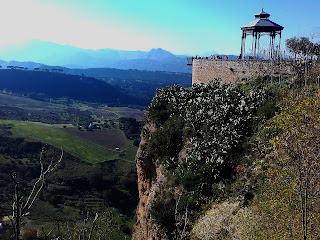 For those staying off the bike, they will be enamoured with this small little city which offers a lot of bang for your buck. To lure tourists, guide books of Spain show glorious full colour photos of cobalt blue skies, brave matadors facing hulking bulls, crumbling castles and of course senoritas lazily waving fans. Luckily it all exists, and if you only have one week to cram all this in, then travel over Andalusia’s landscape of terracotta earth, silver olives to Ronda.  A small city, it has all the spicy elements of traditional Spain but is also artistically rich, more culturally stylish than crass stereotype. Being a place of romantic 19th century travellers and muse for Hemmingway it offers the visitor its crumbling Moorish city walls, Roman villas within striking distance, all in the brilliant Andalusian light. With its many beautiful restaurants, plazas and cafes that perch on the most unbelievable gorge and a panorama that stretches for ages, you’ll find it hard to leave whether you are here to cycle or just to wander. 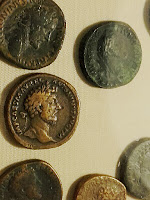 Situated in the Málaga province (most southern in the country and lying only 100km off North Africa’s coast) it is (due to its prehistoric origins), one of the oldest cities in Spain. Nearby in the caves surrounding Ronda, the dawn of human time is imprinted on these dank walls, a testament to prehistoric lives. Beyond this, it also boasts a long history of settlement stretching to the Celts, Phoenicians, Greeks and Romans (who Pliny the Elder and their best known writer called it “the glorious”). In fact, it has attracted the cream of statesmen, actors, artists and poets from around the world.

Most famously, American director and actor, “War of the Worlds”, “Citizen Kane” producer Orson Welles went even as far as to seek eternity here, choosing to have his ashes placed in a flower draped well in the Ronda property of his bullfighter friend, Antonio Ordóñez, after his death in 1985. It was his father, Ordóñez, Cayetano. (“Niño de la Palma”), also born in Ronda, who inspired Hemingway's first bullfighting novel, “The Sun also Rises”.   Welles, had first travelled to Sevilla as a teenager and got involved in the bullfighting scene, making many documentaries on the spectacle and the stars of this time, though he himself, called bullfighting, “a unjustifiable yet irresistible, three-act tragedy”.

However, of all foreigners who have travelled and lived in Spain, Ernest Hemingway is one who embraced it most fully His journalistic career won him accolades and put him into the Paris literary circles of F.Scott Fitzgerald and Gertrude Stein. His first trip to Spain in 1923 to research bullfighting led him to a great love affair with the country which never waned.  He spent his last birthday in Churriana, Andalucia (60th) where he was once again, life of the party, which included friends like the Maharajah of Jaipur.  He shot himself in less than a year.

Love the beauty of Al-Andalus, (Andalusia’s name under the 700 years of Islamic rule in Arab rule from the 8th to 15th century)? Don´t worry, there are lots of monuments left in Ronda. Here you don’t have to go far either. Scramble down the stairway of the old stone fortifications to gaze up at the gorge and its waterfall through the typical arched stone doorway left of Muslim.


Ronda was one of the more important towns in al-Andalus and their hammams (Arab bath) and irrigation farming are only a couple of examples of the long lasting influence of Moorish rule. A kingdom which finally saw it change hands a number of times though different Arabic kingdoms to finally become part of the Isabella and Ferdinand Christian empire in 1485. After the Christian Reyes conquered the town, a period of re-organization occurred with the building of several elegant churches, some great Baroque curly-qued extravaganzas.

A much-loved place set amid mountains it is most dramatic with its stretching bridge (there are several other bridges over the same gorge dating from several eras!). The 18th century saw the building of the city’s symbol, the Nuevo Puente that spans a rocky gorge in stalwart style and you cannot help but gawp at this architectural feat. It is the same bridge that Hemmingway immortalized in the civil war fiction novel “For whom the Bell Tolls” (1940), where the inhabitants of a small town fling the town officials off a cliff is similar to the events at the beginning of the 1936 civil war when 512 of Ronda’s citizens in the civil war were thrown from the bridge. 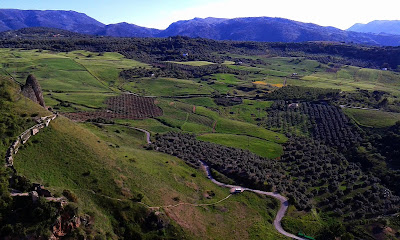 A Herculean engineering project spread over its plunging chasm and the swift Rio Guadalvin, it now means residents constantly cross back and forth from the new and old town on opposite sides of the gorge.  The bridge itself is a magnet for tourists and they hang onto the iron grills that decorate the bridge, trying to snap a 360 view on cameras of this rocky marvel. Although it is the sheer tenacity of the homes that balance on the edge without tumbling over that makes the place so picturesque, the rock nesting jet black clough birds swooping and diving in this deep and somewhat sobering ravine make for good watching. Recently, local fire fighters in harness yanked out 11 mopeds, a washing machine and a rusted car, some of the reclaimed objects found under Ronda’s famous Puente. 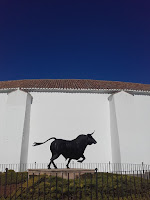 You couldn’t mention Ronda without talking about its Bullfighting culture. The Bullring (Plaza de Toros) and very good museum, is found very centrally close to the gorge and is considered one of the oldest venues in Spain.  Whilst the others are out on the bikes, the non-cyclist can tour around it seeing the statues of Spain’s greatest Matadors or “Torero”s stand with their muleta (the scarlet cape) and elaborate traje de luces suit.  The verb ‘matar’ in Spanish means to kill.

The mistake that most visitors make is that they assume the bullfight is just for tourists. This is most untrue and on weekends you will see most local cafes crammed with men watching the televised fight, during the fight season (it starts at springtime fiestas, running from April until the end of October). 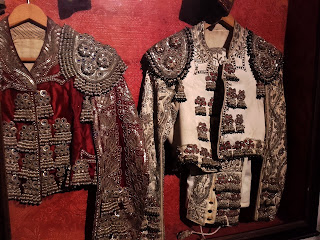 The Corrida (bullfight) actually has 3 stages. In the first (the tercio de varas), the matador is aided by assistants and Picadores (horsemen) and in the second, the tercio de banderillas, the bull is stuck and provoked by banderillas (long barbed darts). The last, the Tercio de Muleta, is where the matador makes passes with the muleta and makes the kill into the spine with a sword (estocada).

The argument ranges of course whether this is a form of culture and art, sacrificial ritual and tradition or animal cruelty. Many say  (for many Andalusians still watch the Sunday afternoon Corrida religiously), that the bulls that are specially breed for aggressiveness have a fantastic privileged and pampered life up until the 15 minutes they are in the ring. However, in recent years with opposition growing and the 2005 Blue tongue virus affecting the fighting bulls and reducing their numbers, perhaps this mainstay of Spain’s culture could go the way of the English blood hunt.

However, bullfighting in Ronda still maintains its hold and Pedro Romero (born in 1754) is perceived to be the father of modern bullfighting (or possibly his grandfather who is was said jumped into the Ronda ring to distract a bull from an unseated noble - the ring at the time was only for those on horseback). However, it was Romero who developed the bloodsport with his muleta passes and moves, chalked up over 5000 kills, fighting into his 80’s. See his sculpture outside the Plaza de Toros (built 1785) and in the park, the Alameda del Tajo. 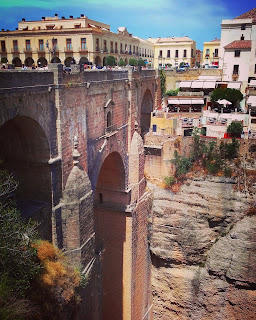 As James Joyce wrote in Ulysses, “... and Ronda with its old inn's windows, the eyes spying hidden after the lattices, so that the lover can kiss the iron grills of the window”. For the non-cyclist, it is the slow wandering around of this town, which is most enjoyable. Past the Alameda park and Bullring, cross over the bridge to the older part of town is full of nooks and treasures so take time to explore these. The “Casa del Rey Moro” with its gardens and its winding stone step is interesting as is the Minaret of San Sebastian. See also in this district the Mondragon Palace, near the gorge, a stately home, said to be built for the King Abbel Malik, son of the Sultan of Morocco. Venture beyond this to the bottom of the town and see the Puerta de Almcabar, the Moorish city walls still standing stalwart as it has been for centuries, waiting for incoming visitors.


Whether you decide to get out and cycle Ronda or just a slow wander around it as a non-cyclist, you will not at all be disappointed. 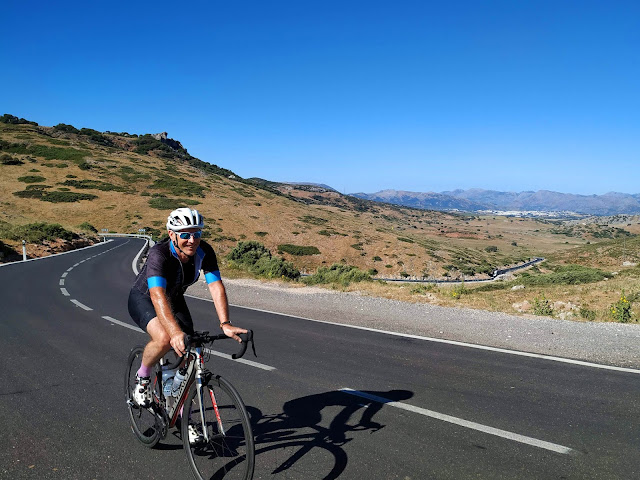 Check out our cycling tours like the self-guided bike tour, White Villages or our guided Famous Vuelta Climbs tour, which are based in or visiting Ronda for more ideas.