Top Eats to Bike Spain on - Improve your Cycling Performance with Nuts!

How to improve your cycling performance and endurance?

If you choose Spring to cycle Iberia you will be amazed by its flowering landscape.
Granada’s landscape is normally seen as stunning, but no so more than when the almond Trees festoon themselves in the frilly Andalusian party dress nature equivalent in March and April, with when their green growth comes through leaves the blossoms strung around on the floor like discarded party favours. 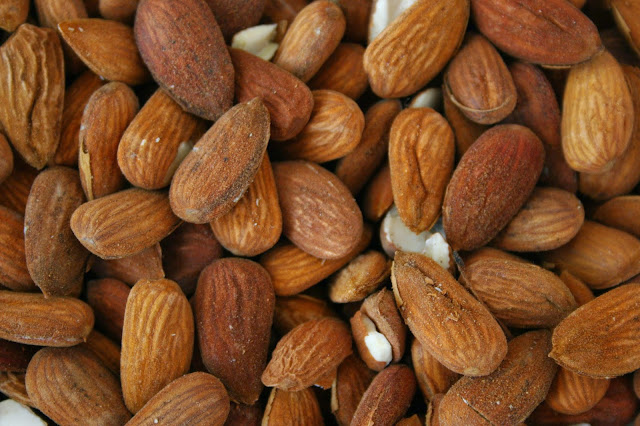 But here we are back in autumn when these trees that have stayed so coy during the summer have come back to life and now having offered their fuzzy cocooned harvest to us; they’ve slunk back into spiny indifference. Travel to any inland village and side streets at the moment and find heaps of shells, the aftermath detritus of an afternoon spent shelling and homes will have spread on their sun-soaked doorsteps their bounty drying. And now we all seem to have bags of the nut in our homes, which are keeping us warm (thanks to a wonderful almond husk stove) or maintaining our weight through overindulgence. 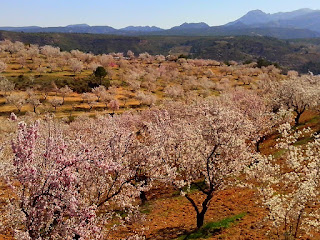 But more than a tasty tapas bar nosh, almonds are one of the mainstays to this former Arabic land. Islamic cuisine and their sweet and savoury dishes make plentiful use of slivered morsels, the chefs tossing them into dishes as if they were planting seeds. So here in this landscape that saw Moorish kitchens dust, slice them, grate and pulverize them, it is perhaps a bit unusual that they now seem only confined to a slight hint in some Andalusian fino sherries or postre time (aside from Ajo Blanco, a white gazpacho, one of the more Moorish derived of Spanish dishes made with blanched almonds) and not usually the main meal. However, when you taste what is done with them then, you won’t complain. The honey drenched almond mixes that make up the polvorones and alfajors of the region are worth looking up in local pastelerias and of course watch out for Turron, a classic Christmas treat made with sugar, almonds, and honey, that will soon be out on display in every shop 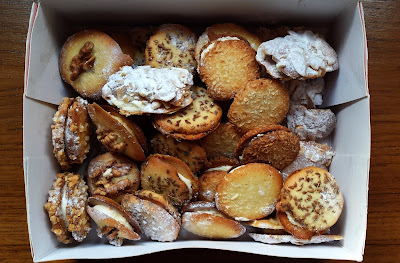 Baking in Spain
Having eaten virtually kilos of Alhama de Granada’s famous pastry, 2 light almond biscuits encasing cream and loaded with the shavings of the nut this speciality dessert made at Balada Pasteleria, will have you doing double the miles on the bike in order to “deserve” eating more!
I can attest to the “Moorish” ness of this teatime snack and any others using the combo of almond and sugar.

History of the Almond Nut

A venerable history, the tree grows freely in Palestine and the Middle East and it is referred to many times in Biblical Scripture as one of the best fruit bearers in the land of Canaan. An attractive tree in bloom, it is susceptible to the morphism prone to poets and writers from whence there arose tales from ancient Greece of broken-hearted Phyllis changed by the Gods into an Almond tree and on her lover’s return, he hugged it so much, it bloomed, an eternal symbol of undying love. Although the Romans tended to take a more pragmatic approach and believing in its obvious fertility powers showered their newlyweds with them. 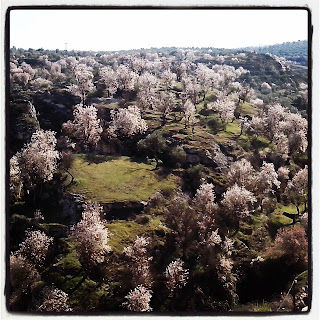 Probably accompanying Alexander the Great’s troops home, it arrived in Greece in the early 300B.C era and spread beyond easily adapting to the Mediterranean landscape and climate, and filling the rolling hills that hadn’t been cultivated before. This mainly due to being so hardy and having a deep root system that seems to allow them to take care of themselves in shallow rocky soil, despite drought conditions as experienced here year after year.

Spain is one of the biggest producers of Nuts!

However, the last few years seeing hot exceptional weather even affected these strong soldiers and Spain, being the world’s third biggest producer in a very very competitive market, (after Australia and then California who actually provides 80% of the world’s almonds), is having to change practises to keep up with demand (the 2018/19 harvest saw about 60,000 tonnes picked). Worldwide climate change, drought and diet changes (more people using almonds as meat/dairy substitutes) mean that the great water usage in growing these treats need to be re-examined. 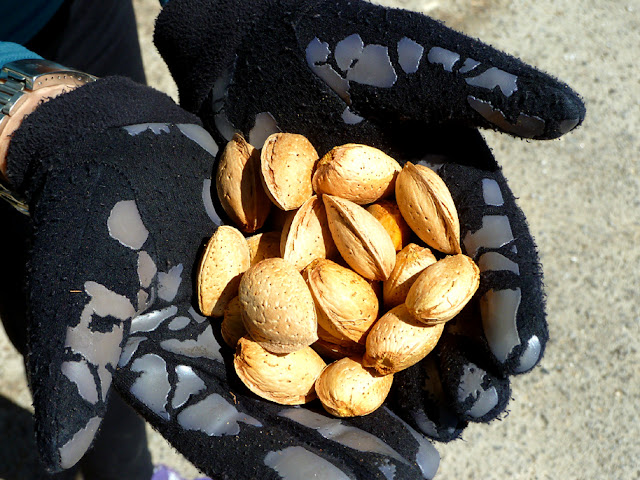 The great thing about these little furry packages is they have multiple uses and in a country big on tapas and... drinking, it was thought by many that its most important assets were in preventing drunkenness, and there are many hints of all sorts written through history to remember to take a few whilst imbibing. Women, on the other hand, (to be most generalizing) seem to have discovered more important properties of the nut and found that by extracting its oils, the benefits gained through using it in massage oil and the creation of scrubs with the husks, a good exfoliate. The oil of the almond was and is used in many modern cosmetics as a skin softener and beneficial for chapped skin.  Just perfect for those wind burned cyclists.

Queen of the Almonds! 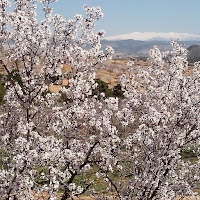 Definitely, the world has become smaller via the internet, and the popularity of Spanish tapas and pintxos swells, with local delis worldwide stocking Jamon Iberico, quince paste and fig jam, so has the appreciation and great demand of the particular exclusive Spanish product, the Queen of the almond, the Marcona. It has made the average Spanish farmers sit up and notice (now often ploughing cereals crops under to plant nuts instead). These lovely buttery Spanish beauties are a real attention getter. Round, soft and tasty, these almonds are a real favourite for nut aficionados. Speaking of, all cyclists should be.. 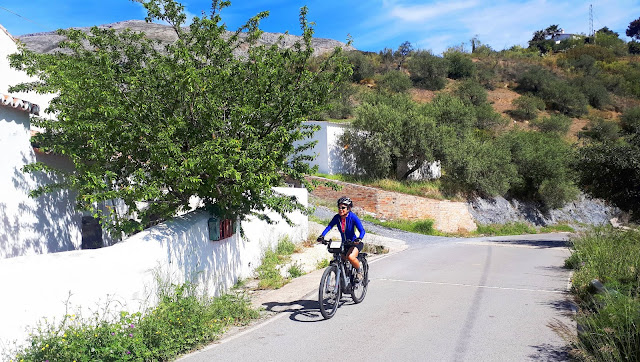 A healthy snack for Cyclists

Their natural great taste does not take away from their nutritional qualities and Almonds are also great protein sources, ask any Chinese herbalist and they’ll suggest any woman should be partaking to beat off osteoporosis, just a handful a day is beneficial due to its calcium content. They are also great for zinc, folic acid and vitamin E.
As if you needed any better news about ingesting this tree fodder, a 2014 study from China actually showed results that whole almonds about 75g taken prior your ride, improved cycling distance and endurance performance for cyclists by enabling greater and more effective oxygen use then when they ate the same calories from other sugary foods/cookies, etc.
Thus, these freebee foods you will find roadside cycling here in Andalucia, is absolutely perfect for tucking into your handlebar bag or back pocked before going out into the countryside to pick some more.

Our Guided and Self guided Andalucian cycling routes during March and early April give you the best opportunity to see Nature’s finest and tapas on this delicious snack.