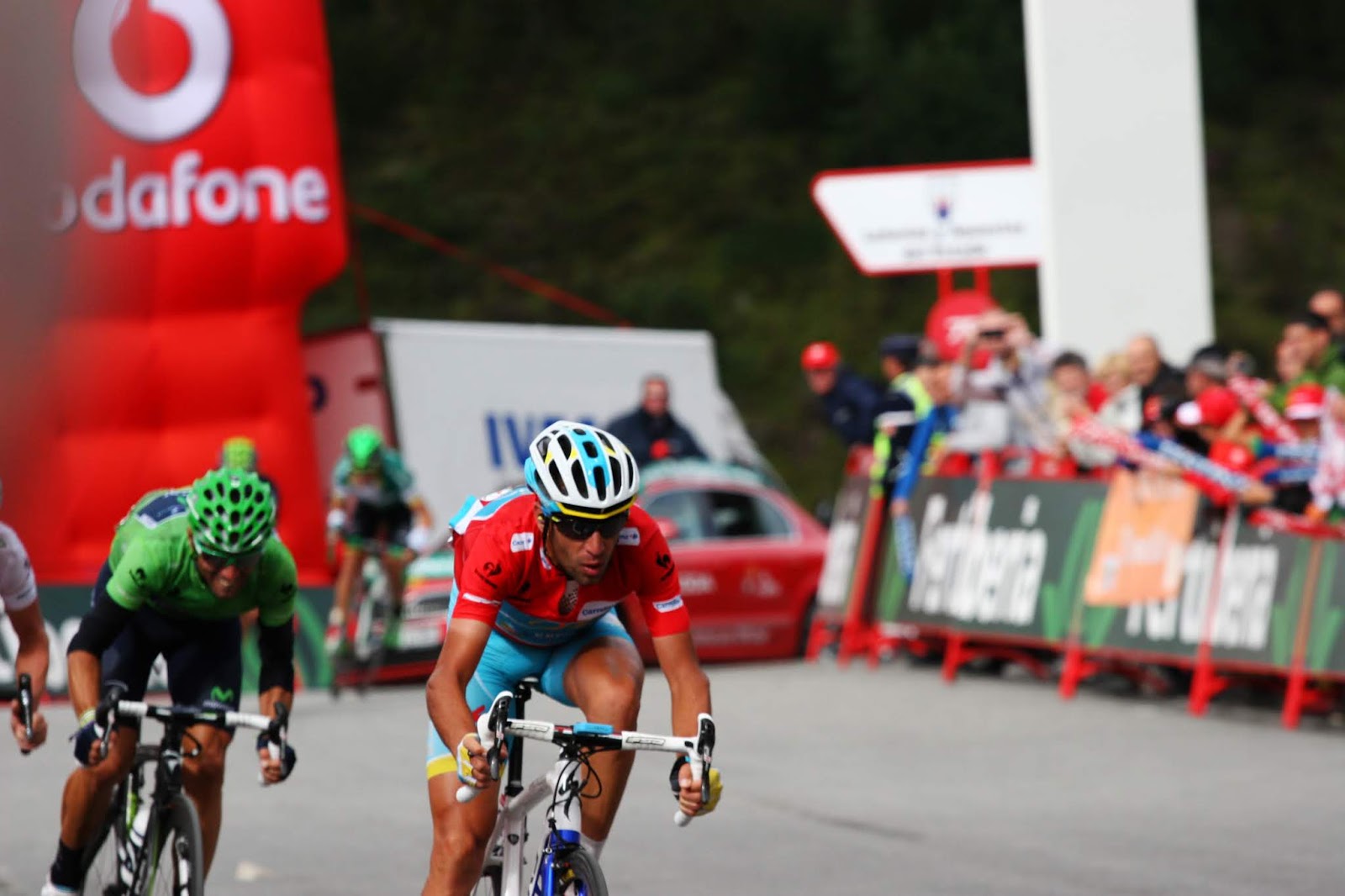 This Spanish three-week Grand Tour bike race is set in the most historic of countries, taking in the most arduous climbs in a pulsating and photogenic landscape. 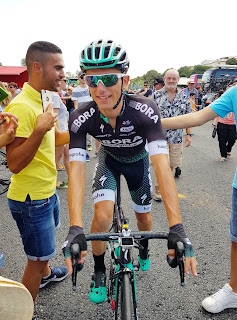 Action and Drama guaranteed in this Spanish Cycle tour
As Jacques Antequil, 1963 winner of La Vuelta, said of cycling, “This is a tough profession and we’re not in it for pleasure.  It is hard and dangerous”. La Vuelta certainly lives up to that with its exciting ascents, man against mountain battles, and descents that make the viewer watch through laced fingers as the cyclists take on the laws of momentum, outdoing each other on impossible corners.   Never boring, always hard and dangerous of course.

The Vuelta is a race that premiered in 1935 (a year before the Spanish civil war) and saw 50 cyclists face 3,411 km (2,119 miles) of 14 stages averaging over 240km per stage (compare this to the tour of 2018 where there are 21 stages - 3255 km, (avg. 155km per stage).  It was a race for only the strong and definitely not for the nervous! La Vuelta used to be a spring race before 1995 which meant an even more inclement climate for the riders and viewing public, so holding it at the end of summer is some compensation, though you may not think so as the hot Spanish sun beats down.

History of La Vuelta a España


La Vuelta’s roots were founded on the back of a small 1932 race that celebrated the Spanish Republic’s 1st anniversary and has seen 23 Spanish winners (Alberto Contador in 2014 being the last). 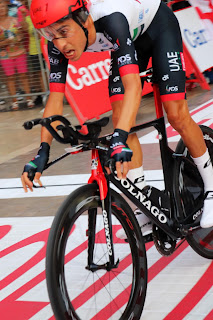 However, the Vuelta seems to suffer from a bit of self-confidence failure when compared to France and Italy’s Grand tours despite its mountains, impressive landscapes and attractive medieval villages.  This partly may be explained because of Spain’s relative isolation from the rest of Europe for such a long time due to its dictatorship and the consequences of its Civil war.  However, it seems that the race is coming into its own recently and has stopped being used as a training ground for other races (especially the Worlds), and instead becoming recognized as the epic it truly is. However, many cyclists today now see it as a place to redeem themselves and failed aspirations (being the last grand tour of the year) or make their comeback due to missing the other tours earlier in the season due to injury.  As Roberto Heras remarked, “The Vuelta gives me prestige, and the Tour (de France) takes it away”. 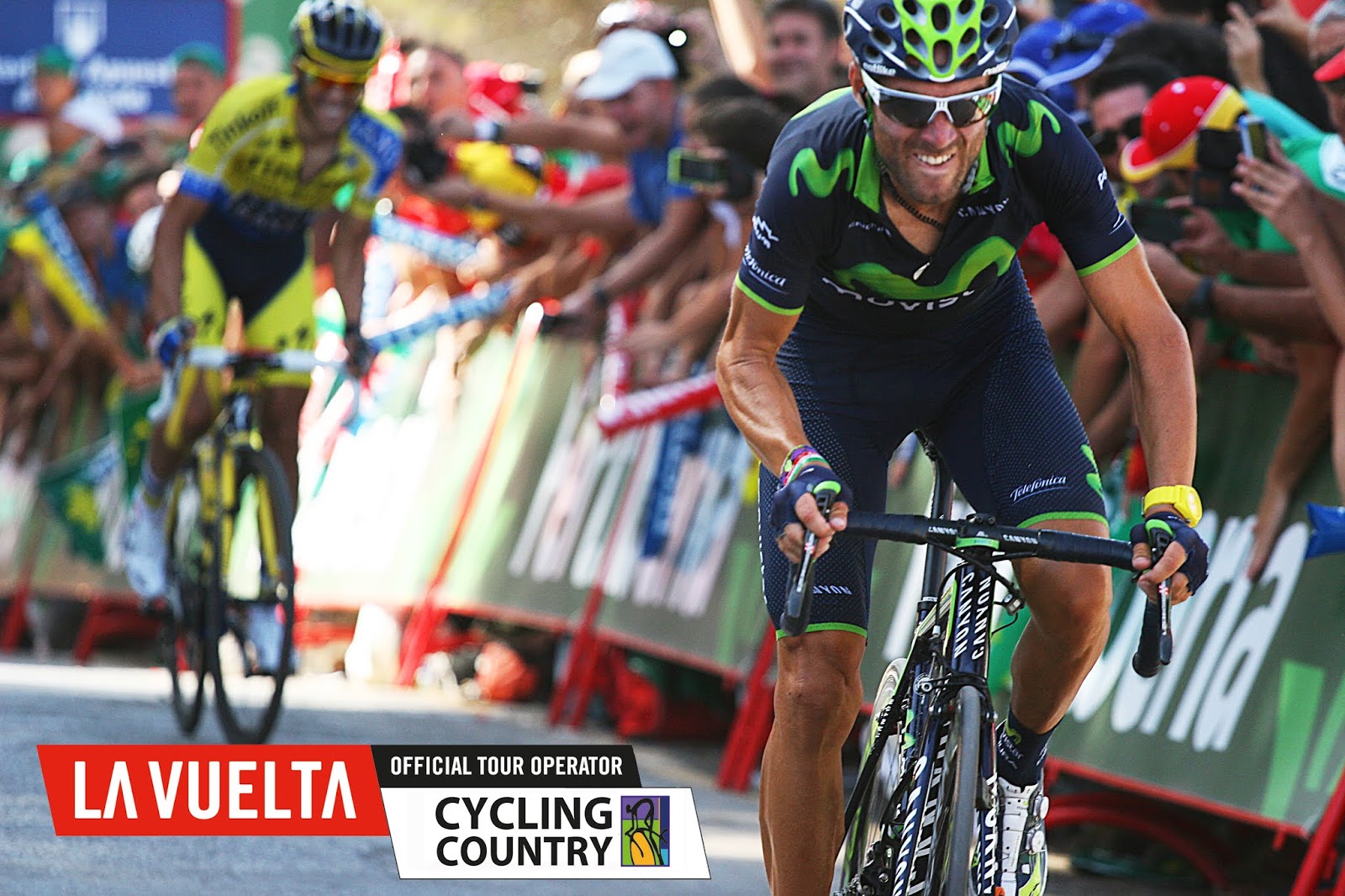 The Big Stars Come Out! 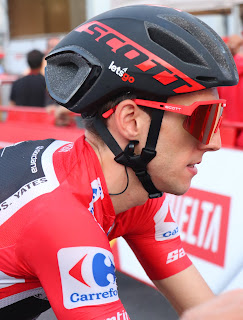 It has always been a bit of a wild bag with stories of savage routes to test (and break cyclists) and good human-interest stories. Tales about the Colombian climbers who shipped 100s of kilos of “panelas” – their favourite sugar cane sweet to keep them going, or the international faux pas with race organisers Unipublic putting a young Soviet team and the American team Xerox–Philadelphia in the same hotel in the deep midst of the Cold War. Or even the 2019 Vuelta, where a TV helicopter covering Spain's La Vuelta cycling race exposed a rooftop cannabis farm. 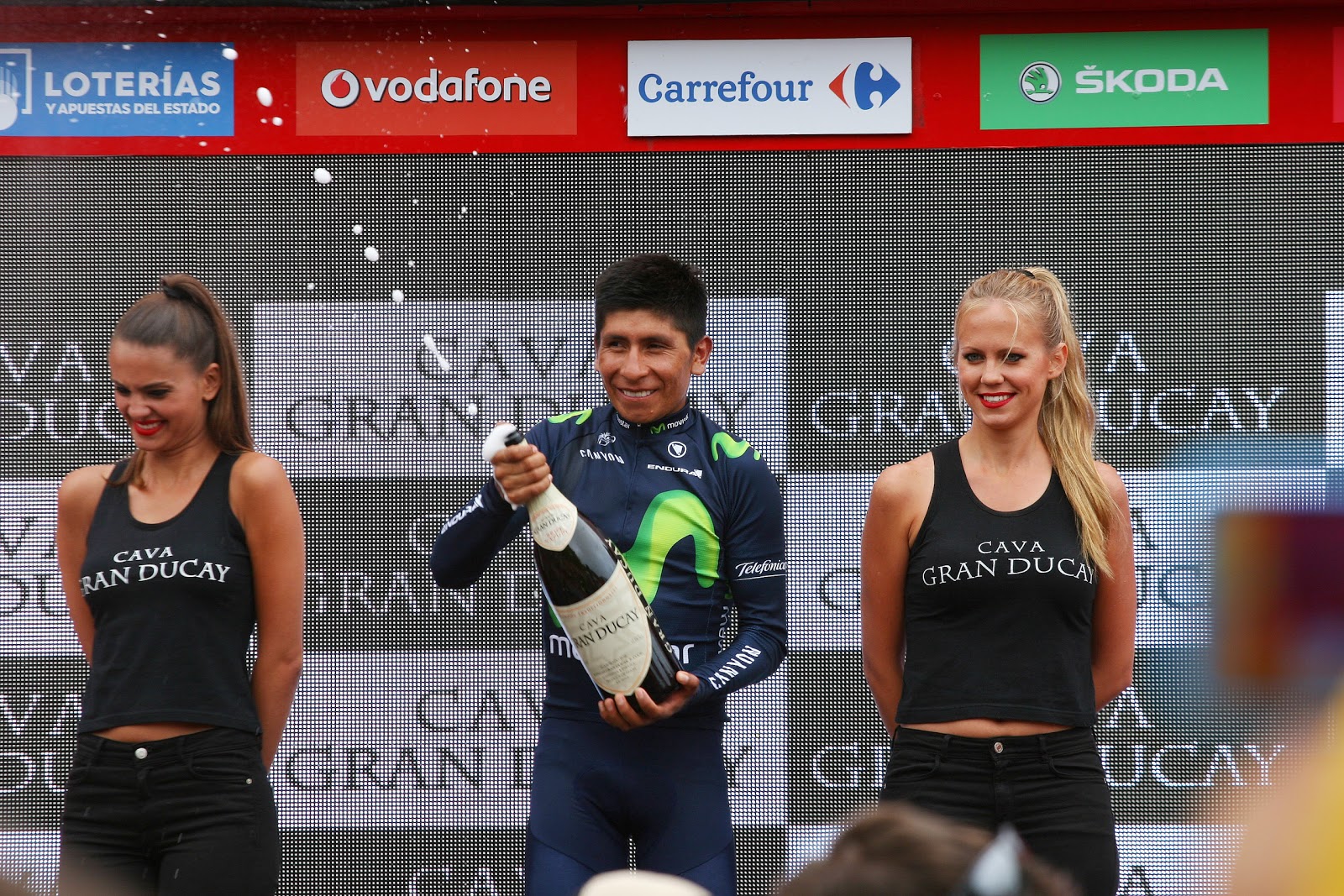 The race is never dull and has a distinctive character – a bit crazy, definitely challenging and the Spanish on home turf are a force to be reckoned with.  They are great riders and have some of the best and challenging roads in the world to get it right on! 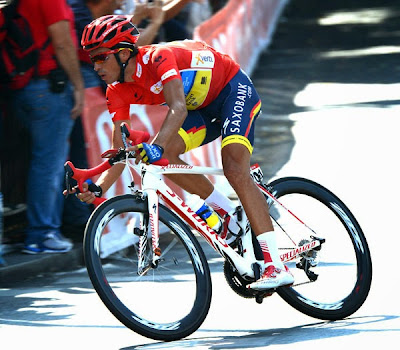 Notably it was Alberto Contador’s (Spain-2008) win that launched him into the record books by winning all three Grande Dames, the first Spaniard and the 7th cyclist ever to do so (Merckx, Anquetil, Gimondi, Hinault, Nibali and now Froome being the others).  His 2009 performance and win in the Tour de France and the public bickering between his teammate, Lance Armstrong, gave race enthusiasts, competitors and writers much fodder for discussion. Ironically, the Danish National Anthem was played at the celebration podium rather than the Spanish anthem, The Royal March. Happily again, 2010’s Tour de France saw another win for Contador and his domination over the field of riders. Although the drug scandal following never seemed to end, and his 2012 win followed weeks after a drug ban for him ended. Like we say, it is never a boring race!   His retirement in 2017, with La Vuelta being his las Pro race, saw scores of people out to cheer him on and show their appreciation to “El Pistolero” for putting on such an exciting show in his race career and winning the grueling stage of the Angliru single-handedly. 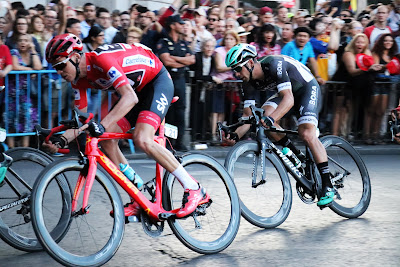 The 2017 Vuelta, also saw it as a record breaking year with Chris Froome’s eventual stand on the podium (after a 6 year quest), seeing him as the first British winner and also the first rider to win the Vuelta a España and Tour de France in the same year since Bernard Hinault in 1978. He then went on to win the Giro, holding all three titles in succession. Of course, the sabaltumol drug scandal that followed Froome after his Vuelta win again added to the intrigue, with the case finally being dropped days before the Tour de France. And then he not only became the first British winner of La Vuelta but also of a Grand Tour (taking that honour away from Sir Bradley Wiggins) when in 2019 he was awarded La Vuelta 2011 win after Juan José Cobo was found guilty of an anti-doping violation. La Vuelta loves a good story! 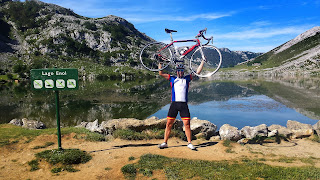 "As long as I breathe, I attack." Said Bernard Hinault, a two-time winner (‘78 and ‘83) of the La Vuelta’s golden jersey (now red). His specialty of mountain climbing served him well, as you must be a masochist to race the Spanish terrain.  Some of Europe’s best cycling climbs are found in La Vuelta and much of it is down to director Javier Guillén’s vision which favours the northern climbs, with Madrid being the central heart to end in. The schedule is often devised to have “short and explosive stages” which of course produces a thrilling display.

Without doubt it is a mountainous race which always produces fantastic attacks and never allows the GC leader to relax. In fact, the race can be won and lost at so many points due to the steep and sometimes long summit finishes that the Vuelta has become famous for.  One of the most brutal will raise its head again in the 2020 edition, featuring the extreme challenge of the Angliru, a beast of a cycling climb, now infamous throughout the world. One for the bucket list of any road cyclist. 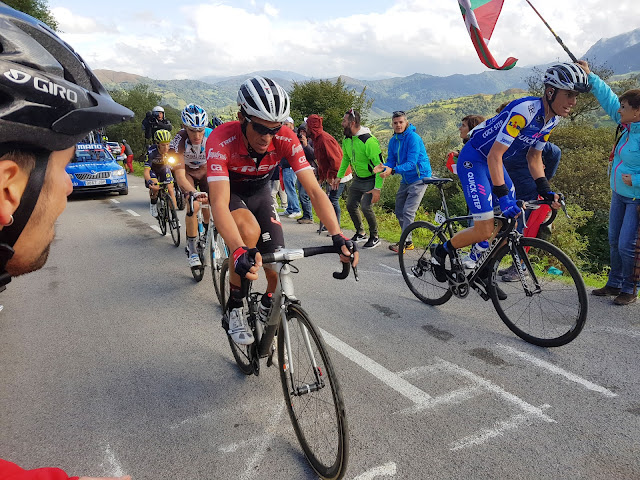 Cycling The Angliru in Spain

The Angliru is only 12.5 km long and the first half of the climb is not too demanding.  The first 5 kms are at an average gradient of 7.6%, the 6th km is 2.1% (that feels like downhill!) before the incredible last 6kms are an average of 13%.....gulp. However, at 3 km from the peak of the summit there is a long ramp that reaches a killer gradient of 23.6%, making it one of the steepest climbs in road racing in Europe. 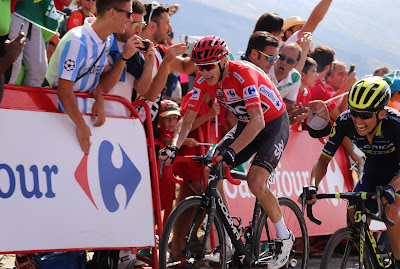 With other great climbs like the beautiful but cruel, Lagos de Covadonga, Bola de Mundo, Ancares, Farrapona, Camperona, Sierra Nevada, etc, etc, (there are so many too list) and forays into France and Andorra with peaks like the Tourmalet (2020 La Vuelta), L’Aubisque and Gallina featured, well, what more could you want?  Throw in the passion of sizzling Andalucia with its beaches, high Sierras, flamenco and bullfighting culture, and the North’s gritty summits and delicious seafood fare, wow, what a feast. 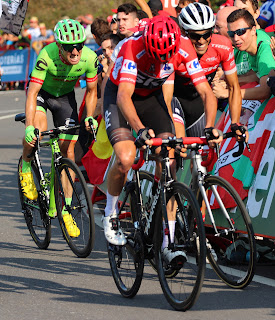 Add into the mix explosive cycling battles, an aggressively unrelenting terrain and of course the human stories of the cyclists as they cycle Spain over 3 weeks in August and September and you have one incredible event.

We can hardly wait for this year’s edition, with the Grand Depart taking place for only the 4th time in its history starting outside the country, in Utrecht, The Netherlands on August 15th, 2020. A truly inventive route, as the race also snakes through France, Portugal and also Spain for the magnificent finale in Madrid.

Join us and experience the most exciting pro-race cycling tour as a VIP on our official  La Vuelta Cycle Tours. It is as close to the race as you can possibly get. Ride the same roads on race day and cross the finish line with our special access only hours before the stage winner appears.