For the cyclist, Spain has a lot of mouth watering food to fill that hungry biker’s stomach, think hefty slices of tortilla, jamon Iberico and of course Paella.  The Mediterranean diet has proven to be one of the world's healthiest and packed full of goodness with its olive oil, vegetables, fish, nuts and cheeses.

The Joy of the Spanish healthy Diet for Cyclists!

The enjoyment of pulses here which take longer to break down, so long lasting carbs, are integrated into a lot of dishes and go a long way into making the Mediterranean diet a good one in maintaining a healthy weight without great swings. It has also proven to help with cholesterol problems and of course, all this healthy eating means, healthy mind and helps in the battle of depression, sleep problems and mood swings.  It is no wonder that the Spanish have such a good quality of life.

However, saying all that, when visiting here on your Spanish bike tour, you might try going off piste and try some of the less well known dishes. These may not spring to mind initially on your visit, but worth trying out whilst you bike this great country.  They may surprise you and you might want to take home a few of these recipes. 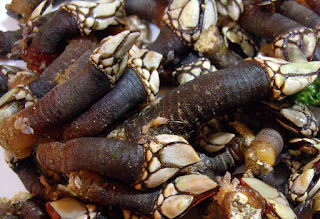 Percebes (Gooseneck Barnacles) - Who wouldn't say Boo to this Goose?

The strangest one, I personally think is Percebes, a great treat in Galicia which doesn’t come cheap.
They are odd, odd, odd looking.  Imagine, someone in dire need of a pedicure.. a gnarled up dirty baby toe is what springs to mind when I see them.  Unfair perhaps, but that is what they conjure.  However, when they are boiled the tasty meat that you can pluck from this barnacle is pretty good and you might reconsider your aversion.
If you can believe it, the barnacle goose, was thought to have sprung from this barnacle (hence its name), in a time when people didn't realize that this fowl migrated. Both have a very similar monochromatic colour scheme and this belief seemed to act as a loop hole for the pious who weren’t allowed to eat meat on certain holy days, but could partake in Barnacle Goose.  Though even in the 15th century, some were sceptical of this line of belief. You can try this dish on our Camino de Santiago bike tour or Self-Guided tour, Green Spain. 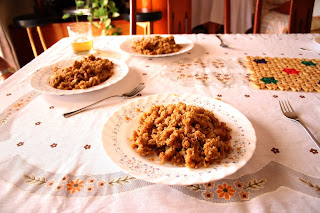 Try Home cooked meals in Andalucia on your cycle tour there.

Not a crazy unusual taste but it is a dish you will run into for sure and unless you are dying to eat a whole loaf of bread, soaked in olive oil and fried, then stir clear.  We do like this dish, for at least the first 5 spoonful’s, then it gets a bit much. However amazing for .. cyclists who want to carbo load quickly. Based from a society that eats a lot of bread, there is a lot of stale bread leftover, so what better to do with it than make a bread crumb dinner. Similar to Paella, every region has its own take on it (In both Spain and Portugal), some adding more garlic, others, pieces of pork, or more vegetables, etc. Come any time of the year to Andalucia and you will be served this, although it is a great autumn time dish due to its heaviness. Try it on our Andalucian bike tours! 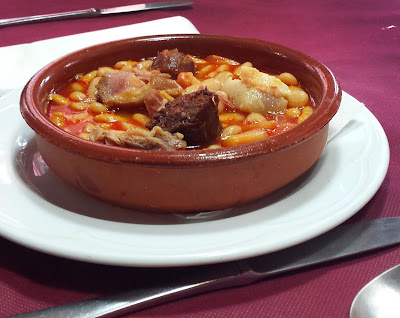 Callos - Do extra miles for these innards

Awful offal! No just kidding, some people love Tripe.  In fact a lot of cultures worldwide have their own favourite way of doing cow’s or sheep stomach lining.  In one cycle trip we made from London to Turkey, we ate it in a different way in about every single place from Hungary, Romania, Bulgaria ending in a beautiful 5 star restaurant in Istanbul, where it was brought out on bone china. A firm favourite in Madrid, where beef is used, it is a nice winter dish.. if you can avoid the linings and get a yummy taste of peppers and chickpeas.  It does however throw in Morcilla (blood sausage.. yes that is real blood) in there as well.

Eat your veggies on a Spanish cycling tour!

Not a far stretch but there are some dishes here with some unusual pairings but they actually work wonders on the palate.  Aubergine or Eggplant can often be a disappointment in its mushy tastelessness but fry them up and pour some molasses over and bang, here is a great little tapas taster. Very much enjoyed with a cold beer, it really is something you should look for on the menu (Berenjenas con miel de caña)in your local Andalucian bar.  Sugar cane grew plentifully and was a crop started by the Moors, during their rule in Spain and it was an important crop thereafter.  However, when Spain, colonized the Caribbean, like Cuba, they realized how well, cane would grow there and literally destroyed their own homegrown industry.  Only one place in Spain now produces cane syrup (like molasses) and it is down on the Southern coast. 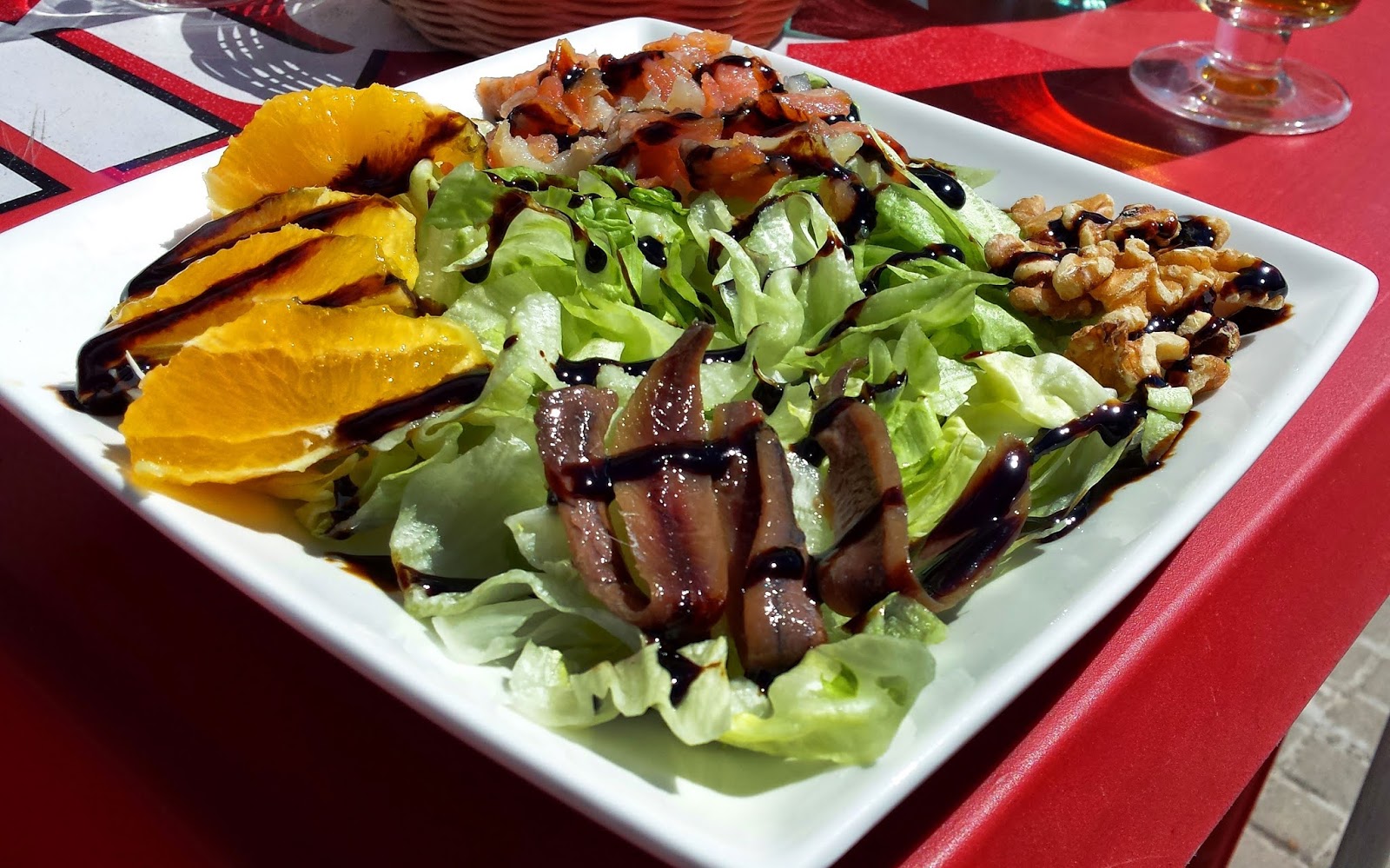 Another great combo is oranges and cod salad (Orange and Cod Salad Remojón).  A great salad to try on your bike trip in Andalucia.

Rabo de Toro! - You don't even have to be a Matador

A real Andalucian treat and one you will get everywhere in Sevilla to Almeria. Perhaps the tail is not the best part of the bull to sup on, but of course is made most delicious in a stew. If you are a meat eater… if not, and are pescatarian, try fish cheeks!  Which is the best part of the fish and found as “Kokotxas”, a classic Pintxos bar dish in northern Spain, like Bilbao. Indeed any animal as pork or beef cheeks (carrillada) are also pretty high on the menu choice for many here.  Braised and done with sherry, Pedro Ximenez, even better. 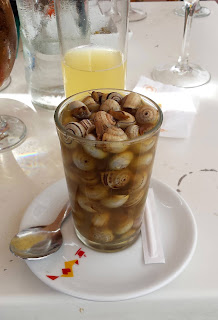 ¡Ole Ole Caracoles!
Ooh lovely Snails, not just the domain of the French. My first sight of them was at a local Andalucian market, where an elderly woman was sitting on a stool with a huge pail of snails and tapping any errant snail trying to escape over the top, with a spoon, whilst dolling bags of them out to customers.  They are done everywhere in the country and often cooked with a liberal dose of garlic oil, sometimes paprika and salt.  Warning, snails are a lot bigger than you would think, when you take your tiny fork to draw them out of their shell to eat. They seem to just keep coming!

When Cycling in Northern Spain you must eat Seafood! 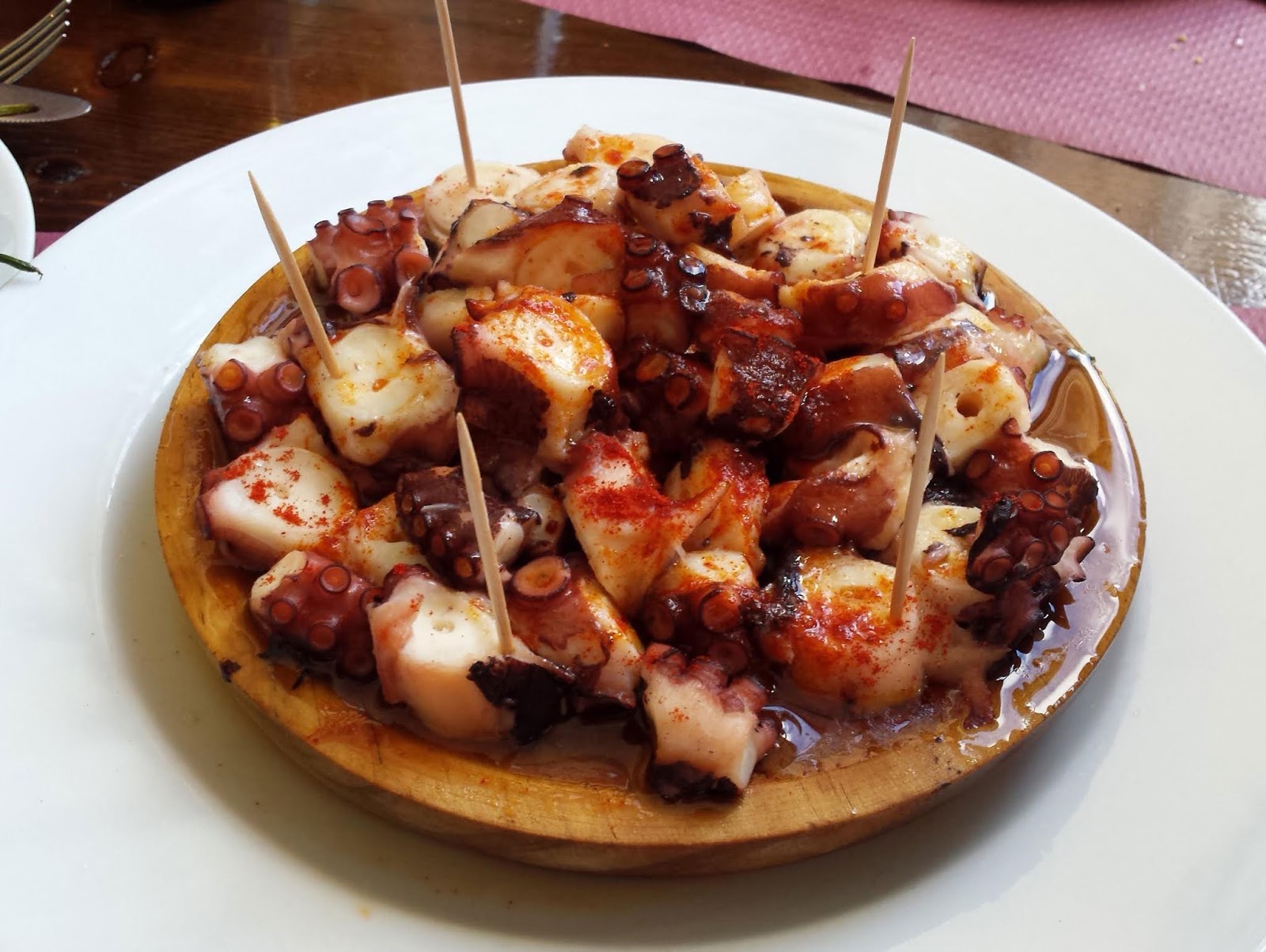 Something from the Sea now, with octopus, and a tasty Galician dish that you will find everywhere up here.  There is nothing better than getting off the bike on a chilly day in Galicia to sit down in a cosy bar and eat these up! Served on a wooden plank usually, a lot of people are put off by the cute little tentacles that you have to suction up in your mouth, However,  keep with it. boiled, then done up with a little paprika, olive oil and salt, you will hover these up easily. Try them on our Coastal Camino Bike Tour!

A delicious list to check on your next bike tour in Spain.  Go ahead and be brave!
Our self guided bike tours give ample opportunity to try these dishes when you get off the bike. 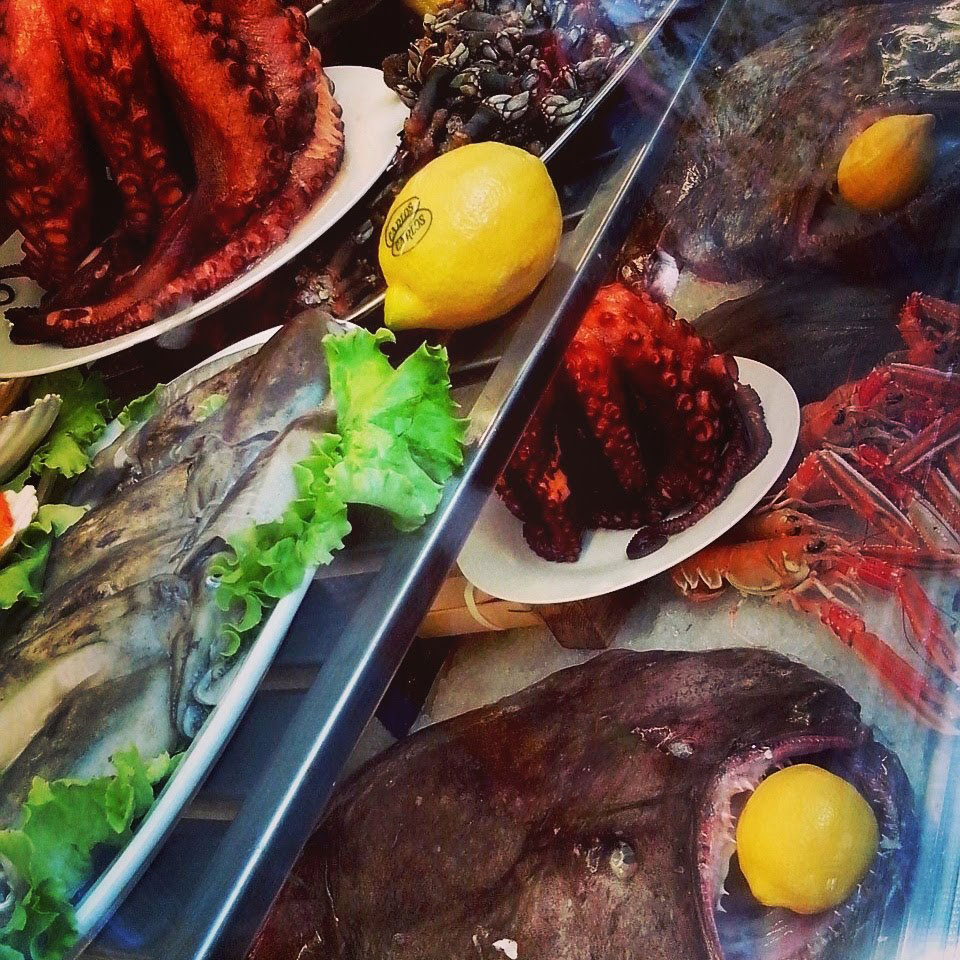 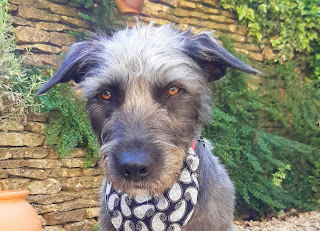