Guatemala’s drama makes bikepacking there a challenge but it is so rewarding - Notes from a 2005 Cycle Tour of Cycling Country founders, Maggi & Geoff 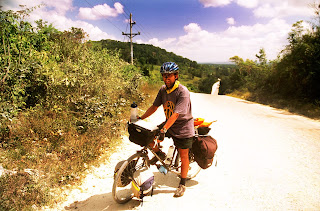 The dark day that found my husband and I standing with our bikes in line at the Guatemalan customs window with an assortment of nervous people should have been enough to turn us around and cycle back into Belize. The stormy morning was made even more foreboding knowing the desolate road past the border at Ciudad Melcor de Mencos had recently been rife with armed hold-ups.  Yet this soon became a hazy thought, as the reality of battling the first 20 miles of unpaved Guatemalan roads, gigantic potholes and steep, slippery ascents, which might register a 1 in 4 sign anywhere else, necessitated our immediate concern. 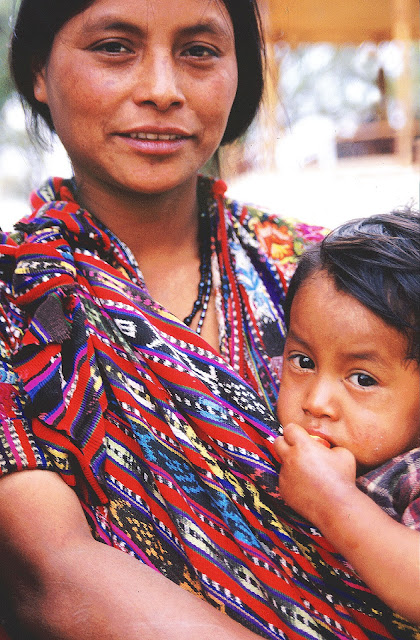 Not to take this violent country lightly, its struggle against Spanish Conquistadors, shattering earthquakes, mudslides and modern day death squads makes Guatemala’s history grim reading.  The Peace Accords of 1996 ending the 36 year civil war was an uneasy truce between corrupt government armed forces and revolutionary guerrillas. Civilian deaths (mainly indigenous) numbered over 200,000 but even today the native population is persecuted, leaving them alarmed for their future. The border area between Mexico in particular with its gang violence including everything from extortion to arms and drug trafficking has unfortunately also led Guatemala to be one of the most dangerous countries to live and travel. In short there is still a long way to go for improvement. However, despite this harrowing past, it is a country of contrasts with breathtaking scenery, colourful market places, outstanding monuments and an engaging,  mysterious multi-layered cultural backdrop.
Cycle Touring in Tikal, Guatemala 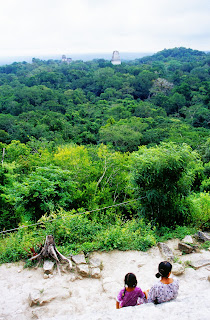 Starting in the jungle of the country’s north province, Petén, we explored Tikal the immense tangle of 2000 year-old Mayan temple ruins in the midst of rain forest. With the evocative cries of howler monkeys and prism coloured birds permeating the thick air, the ancient kings’ great temples are haunting.  From Tikal, and heading south, almost hugging the Mexican border, we rode on quiet paved secondary roads passing through a large, lonely landscape of vast cattle farms interspersed with sadly deforested undulating hillsides and overhanging tropical foliage where the road kill was tarantulas and boa constrictors.

In crossing into the more populated Alta Verapaz province, shouts of “gringo, gringo” often echoed after us and we passed tiny villages where entire schools flooded out, teachers included, to fill the roads to capacity and wave at us. The word “Gringo”, meaning foreigner, has several connotations and the graffiti that is found in the capital of Guatemala City expresses the negative (an American involved with a controlling corporate). For us, we were told, “they don’t know what else to call you and it’s the only word the children have to express surprise upon seeing tourists in their hometown” (and on bicycles no less!). 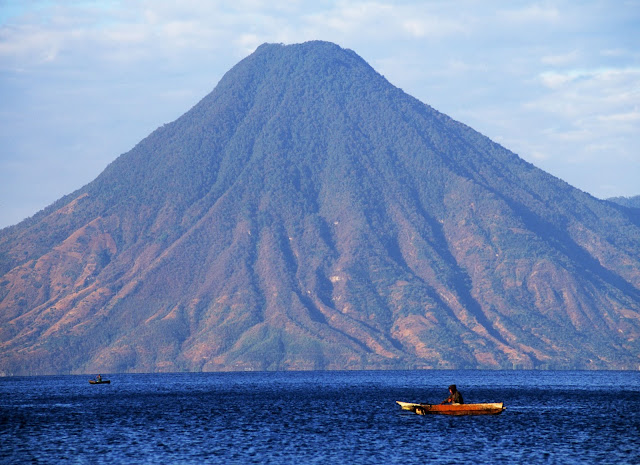 In this romantic region of cloud forests, a place of long precipitous switchbacks is Coban. A former German colonial town, the scent of its fine coffee (Guatemala’s largest export crop) permeates everywhere. Here we stayed with a Mayan family and experienced the diversity of their religious world. A fascinating mix of beliefs incorporating hard-line evangelical churches, frenzied Roman Catholicism and an ancient but active Mayan mysticism.

Cycling around A Country on the Mend 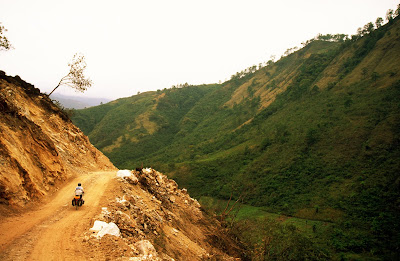 We had read guide books warning of the dangers of “chicken buses” (decorative ex-American school buses packed to extremes like some Guinness world record breaking attempt) and daily papers, in which even with our paltry Spanish, made clear how hazardous the roads were with copious numbers of bus plunges and collisions.  Funny enough, Guatemala’s drivers treated us extremely courteously, slowing down, leaving much room when passing and often giving a friendly toot or thumbs up. And despite residents of Mexico and Belize, two countries, we had already cycled through crying, “don't go to Guatemala, they’re killing people there," we found everyone friendly. Although at times, battling up a steep gradient for several miles and at the same time responding to the constant “Buenos Dias” was exhausting. 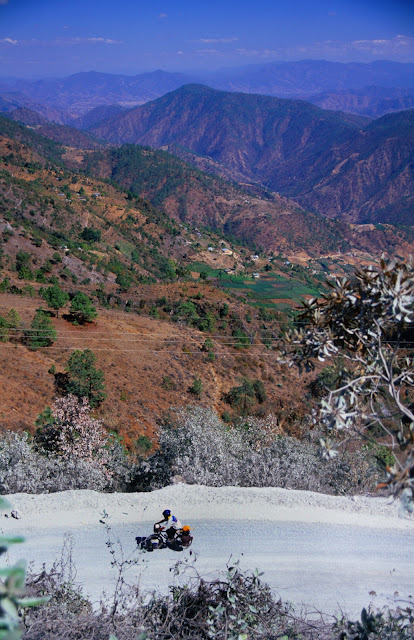 Bus travel tempted us as we turned westwards from Coban into 110 miles of unsettled area stretching into the Highlands’ Cordillera de los Cuchumatanes, where we were warned about bandits once again. This was especially true on the second day from San Cristobel to Uspantan when we started the day with an isolated, 19 miles unpaved, downhill only to begin a tortuous climb in hot, tropical sun on a rough road. The danger of the day was punctuated by large dump trucks bearing huge loads of rocks trundling past, stirring up clouds of dust obscuring our view and coating us with grit. Arriving finally in twilight, it was only to have the first local remark about how crazy we were, and how apparently,  “the whole town is in agreement”. Thus ended a 11  hour day of travelling just 36.8 miles. I think it goes without saying that a sense of adventure, a little madness and a love of challenging cycling are necessary characteristics to contemplate a tour of Guatemala,

For several days after we were to experience the nation wide road enlarging and building scheme helping connect rural Guatemala. For us this was not so good, for subsequent cycle-tourers, probably much better. In a landscape that looks like it has a permanent case of hives, so hilly is it, we seemed to meet every road grader and tar-laying machine in Central America. Although they hadn't actually gotten that far in the road laying stage and were just at the "lets dig it up and make it look like a World War I trench system" point. With our steel bikes laden and unwieldy, we provided ample entertainment to watching road crews by physically lugging our bikes for miles up mountain peaks to skid back down them just as slowly.

Cycling down the PanAmerican in Guatemala 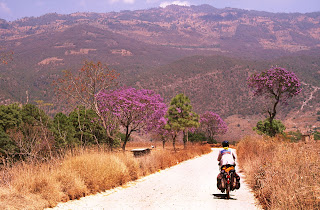 Travelling now on the main roads (there are few choices generally in Guatemala) and onto part of the PanAmericano route system, traffic became more plentiful and hence more dangerous, but highways were paved and fast (on one hill I clocked 48.2 miles/hr without even noticing). However, since Guatemala has more than 30 volcanoes, the roads become Himalayan proportioned and passing Huehuetenango and San Francisco El Alto, we crossed the 2nd highest pass in Central America at 3671m with a real sense of achievement, so strong by that time we even managed a sprint finish with each other. 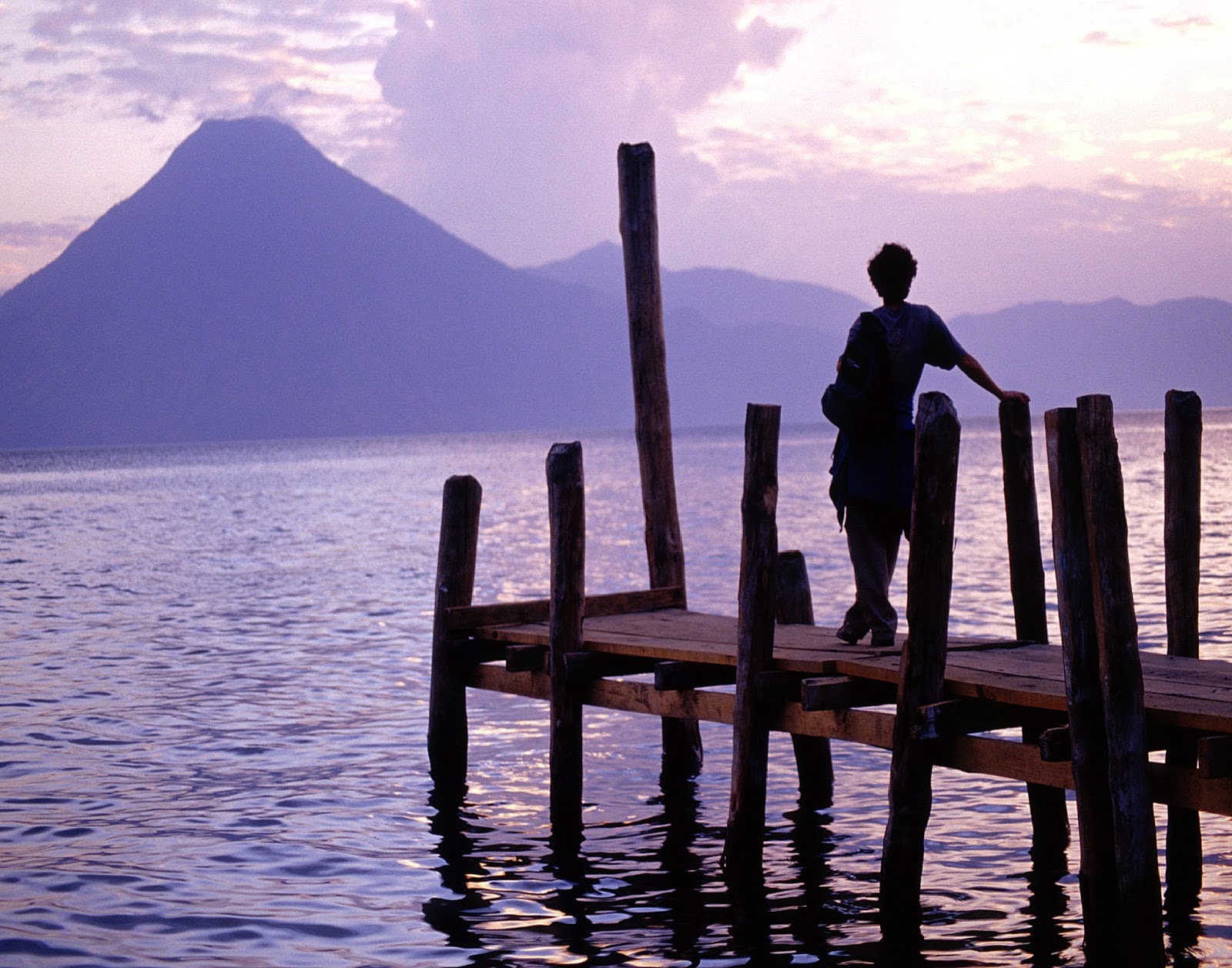 Nevertheless despite our fitness level, it was with some relief that we climbed one of our last mountains to view the scenery of Lake Atitlán far below.   An almost metaphysical place, a flat expanse of water surrounded by the massive cones of 3 volcanoes all reaching over 3000 metres, it looks like the scene setting for Middle Earth.  Coffee plantations line much of the lake-shore and the asphalted roads make for some pretty, if not strenuous, cycling routes. Sadly, as we found out after our involuntary personal police escort, the roads should not be travelled in certain parts due to their instability. 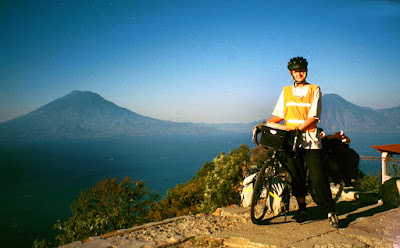 After treating ourselves to a well-deserved rest, the inevitable came and we made the great climb out, with spectacular views of the volcanoes. From here, we held our breath for the next two days until we got to colourful UNESCO heritage city of Antigua. With our only main problem being sourcing a bike box in Guatemala City for the aeroplane, and having had not one puncture, broken spoke, stolen bicycle nor become a holiday fatality, perhaps the many gods of Guatemala were looking out for us after all. 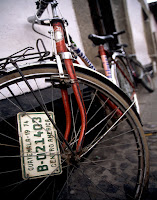 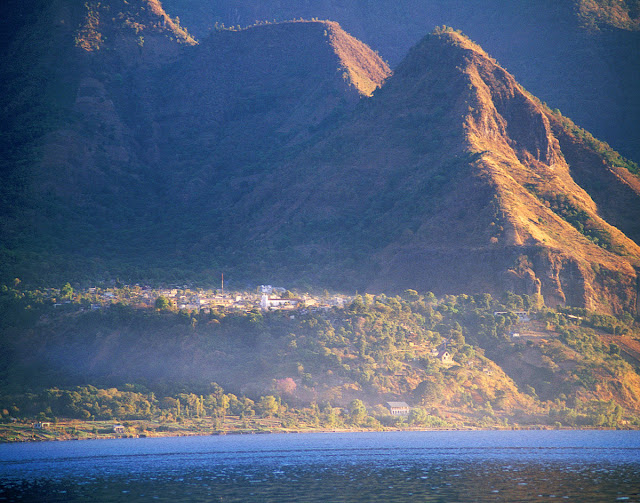