Plan your bike tour in England and don't skip the English Breakfast!

Calorie counting doesn't count on a cycle trip so try an English Breakfast! 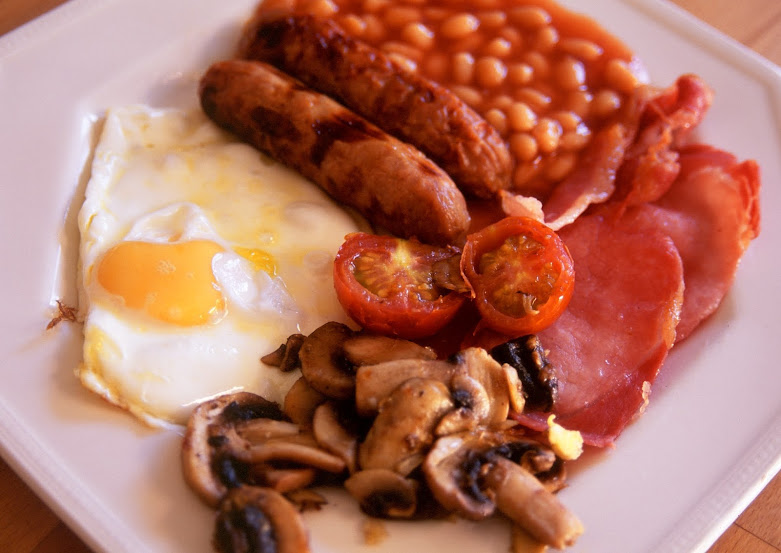 A Local Favourite to try on your Bike Trip

“Tourists love to come here for a Full English Breakfast ‘cause they see it as a traditional British meal, which is kind of funny since we all come to work on a bowl of corn flakes,” said one London café owner before carrying plates laden with brimming breakfasts over to a table of two young trendy Japanese who had coloured bits of their hair bright magenta.  The ‘Full English’ is not haute cuisine, and the English are the first to admit that. However, they do swear by it and in nationwide food polls it still comes consistently in the top three choices for the population’s favourite meal. 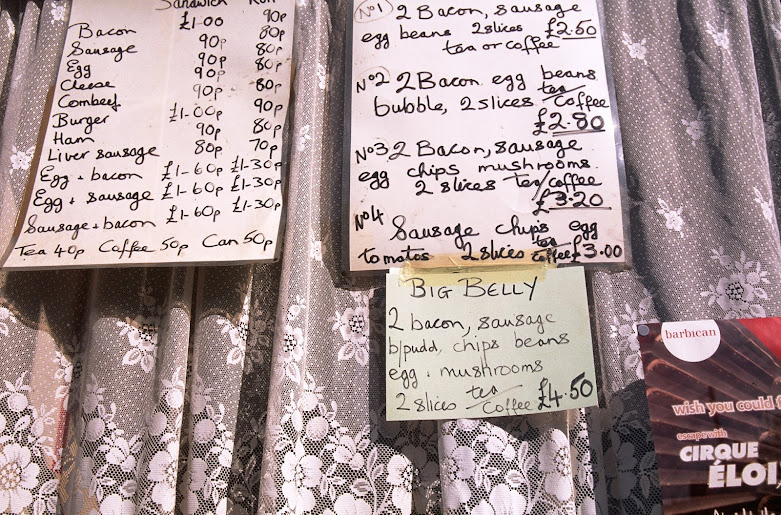 The History of the English Breakfast

Reportedly a 19th century fad of indulgent eating, the tables in wealthy Victorian houses would groan with the weight of breads, marmalades, sausages, kippers, fried salmon along with game of all sorts, sweet cakes, eggs and seasonal fruits. It has now developed into a pared down version of this culinary experience, yet still can cause the stomach to quell at its sight. 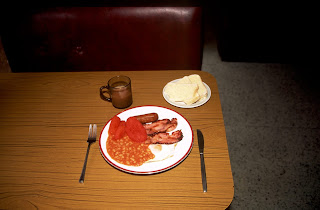 So even though us cyclists, are always looking to trim down, doing everything from investing hundreds of dollars into feather light components to checking out fat content on food wrappers, don’t pass up the chance, whilst on your cycle tour in this country, to try out the Full English. 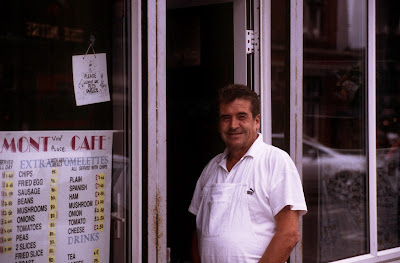 What exactly makes up the ‘Full English’ though? The first step is to fry your eggs and bacon in a lot of oil.

“None of that healthy poached style here,” remarked Geoff, a Londoner friend who took the time to prepare one for me, “and make sure you toss the bread in when you finish to brown it up in the grease.” He continued, cutting a huge slab of butter to plop into the warm frying pan.  Mushrooms are added, diced and fried of course (can you see the pattern emerging?). Sliced tomato, sausages, preferably English pork mixed with herbs and spices, and sliced potatoes are all fried together. And lastly, baked beans in tomato sauce - the one thing not done in hot lard. Piled on the plate, you squeeze a stream of HP Brown Sauce (HP stands for Houses of Parliament), and Heinz Tomato Ketchup over it and dose it with salt and pepper. It is perhaps, not the most refined taste sensation, but there is something infinitely comforting about the meal and it surely fills you up enough to forgo lunch! 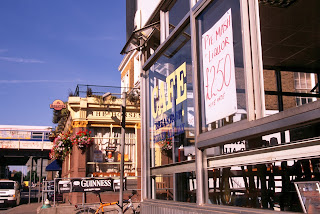 It is no wonder that its daily consumption by the majority of people has become a victim of the health conscious and fast paced modern city lifestyle and is now only a daily mainstay for those labourers who wear high reflective clothing in the course of their work.  For the rest, who find it hard even to slip a vitamin pill past their lips before dashing out to catch the bus to work, it is according to Geoff, a “weekend, stay in bed longer, I have a hangover so will eat later to sop up the alcohol,” kind of meal. However, like the Sunday roast, it is still a beloved favourite and any visitor to Britain (Northern Ireland has their own famous Ulster fry up to tempt, as does Scotland and Wales) wanting a cultural experience should seek out a good breakfast nook café and try one. 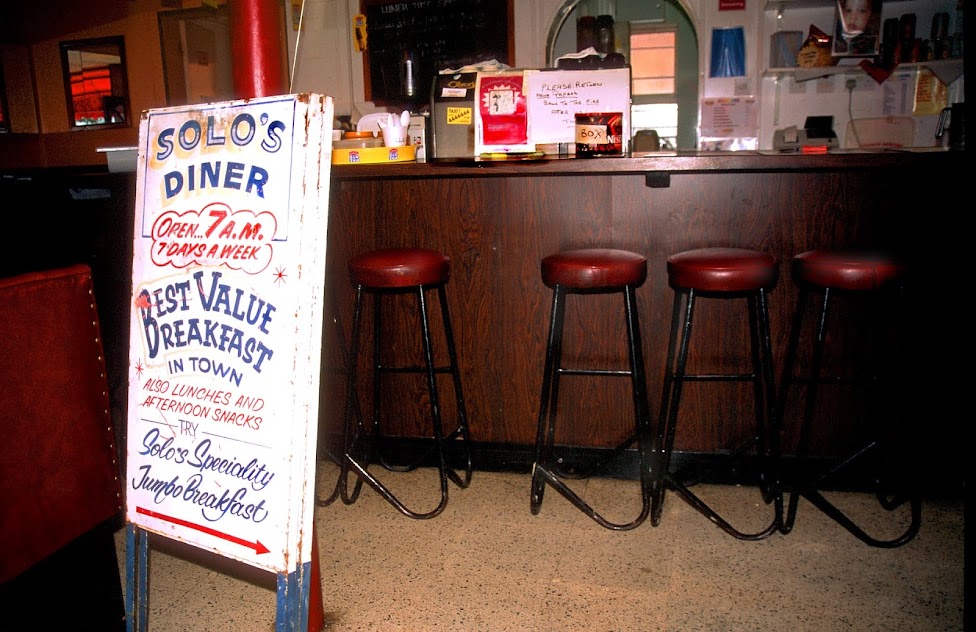 Enjoy an English Breakfast when travelling and support local cafes!

This may be harder than it would first appear, as this health change in eating habits has forced many a small eatery owner to rethink menus and there is a proliferation of tofu salads being prepared in capital cafés than ever before. However, many restaurateurs still stick to the old faithful big breakfast deal which, by the way, is perhaps the cheapest meal you can buy in England for this quantity of food, with average prices running at £3 - 4.  As Mark Roberts, the owner of the Southampton Solent Café, located beside the dock yards of this famous shipping city told me, “I take a lot of pride in my breakfasts, and if the punter wants something quick, I just say, sorry, the ‘Full English’ takes time to prepare and enjoy, go somewhere else and get a sandwich if you’re in a hurry.”

Unfortunately, the current trend is that they do and the office worker now forgoes the fry up for a quick pop down to his local upmarket franchise snack shop, pays double the price, all in order to get back on the phone and make some more sales. In fact, according to BBC figures in 1958, 50% of the British population still ate bacon and eggs every day for breakfast - by 1976, that figure had reduced to 18%.  Today that number has shrunk further and in the wake of high rents and multi-nationally owned organic and trendy juice bars, the family run greasy spoon with its traditional English Breakfast has become threatened. 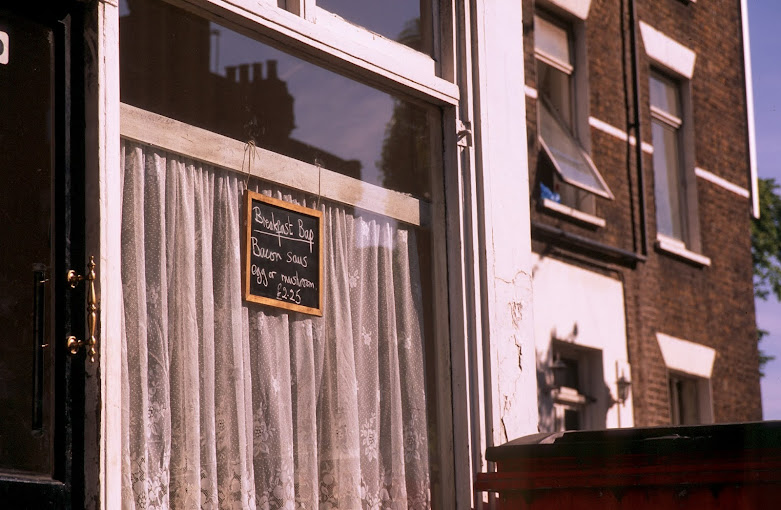 The English Fry Up Ingredients

However, it’s not all gloom and doom for the ‘Fry Up’ (as the English call it), as despite its loss in general daily eating habits, it has crept into British psyche through the years and will never really become extinct. Re-runs of the Monty Python ‘Spam’ skit: “Well, there's egg, sausage and bacon; egg and spam; egg, bacon and spam; egg, bacon, sausage and spam; spam, bacon sausage and spam; spam, egg, spam, spam,” will at least make sure of that. Even Twinings Tea (set up in 1706) and in their own words, “influencing tea drinking habits and helping shape the industry for ten generations,” have the ‘English Breakfast’ variety blended specifically to complement the traditional fry up. As they are a profit generating company, they must at least have some faith in the lardy feast being around for some time.

And if the unlikely happens and it does lose its purchase in Great Britain, due to its popularity it has also migrated overseas with the British masses on holiday. Thus, if you want a greasy egg on toast, drop into any coastal café in Spain, Cyprus, Malta, Turkey or any other resort where British prop a beach umbrella, and you will for sure see the signs outside all extolling their ‘Full English’ feast. 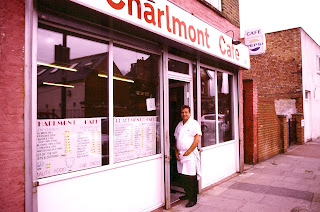 Trolling around London in pursuit of the best British breakfast may have added a few pounds on and most probably my heart is working overtime now, but the research was well worth it. Seeking out the hole in the wall capital cafés, which still serve the meal, is truly a cultural experience. Hard work and early mornings have kept many a mom and pop shop open and the smell of linoleum floors, formica tables, fake wood panelling and plastic chairs mingled with hot oil, seems to be the one thing they all have in common. However, since London is one of the most multicultural cities in the world, the English are not the only ones embracing this greasy tradition, but also many newly arrived have made it theirs too, although sometimes with slight variations. Sitting down to a bacon ‘butty’ (sandwich) in the East End, near Aldgate, I listened to a Bollywood greatest hits album with more than a bit of sandalwood incense wafting in.  While in another, on South London’s Wandsworth Road, I was regaled with reggae and an offer of Belizean hot sauce to accompany my sausage and beans.

Eat Out in the East End of London

Deep in the heart of the City of London, Jack the Ripper territory, the ‘Full English’ is still a main part of the day and one of the best places to find the traditional fry up is in Smithfield’s market, near Clerkenwell.  A market site since the 12th century and where William Wallace (of modern Mel Gibson movie, “Braveheart” fame) was executed. Each night lorry loads of fresh vegetables and meat trundle into the capital, and stalls are set up in the early hours - this type of work deserves a hardy meal.  Deep under the market in nondescript doorways, down several flights of stairs are the darkened halls of London’s best breakfasts.  There at the bar at 6:30am you can share pints of beer and eat a platter of fresh from the farm eggs, sausage, bacon, chips and toast with the burly tattooed men still in their slaughter house aprons and caps, while they continue their long day listening to football scores and talking meat prices.
So be damned the 650 plus calorie count that this tasty meal has, if you really want to enjoy what the British hold dear, pour the tea, pass me the football sports pages and tuck in, Ooh Coor Blimey, How Lurvely! 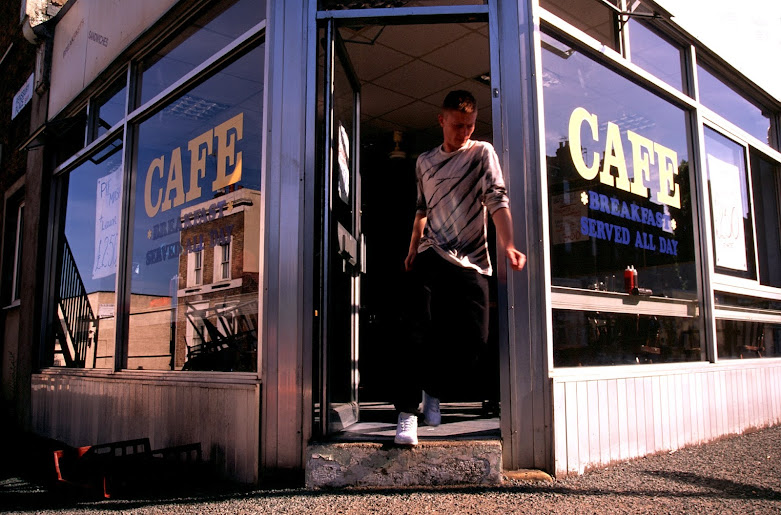 Our Cotswolds tour in England which starts in Oxford and Ends near Bath has ample opportunity to discover and enjoy the Full English Breakfast.  Just leave room for the delicious Pub Lunch!
July 27, 2020
Location: Oxford, UK