Romanian Cycling Tour takes a bite out of Transylvania

Highlighted for cycling by the UCI, should make all cyclists sit up and take notice of Romania. 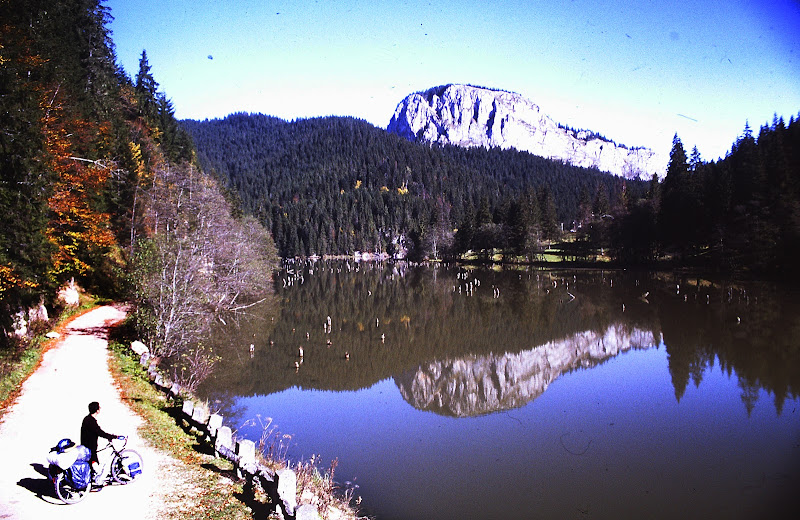 Plan to cycle Romania now and take inspiration from the Pros doing it.

Pro cycling showed up in Transylvania in July with the Sibiu Cycling Tour, a 2.1 category professional road race held in Sibiu, Romania since 2011, as part of the UCI Europe Tour Series.
Having Two World class teams show up proves the confidence Pro-teams are having in the race now, and saw Gregor Mühlberger of the German team, Bora-Hansgrohe win the tour.
The main highlight was the technically tricky 2.5km Individual Time trail (unfortunately wet and stormy) through Sibiu's medieval and mysterious cobbled streets, showing what an alluring place this Transylvanian town is.

Bike Romania, it is not just for Pro cyclists!

Having cycled toured Transylvania in the past, we know it will transform you into a devouring monster of miles.  The Pro-Cycling tour only highlights Sibiu but there is so much more to enjoy cycling in this region. 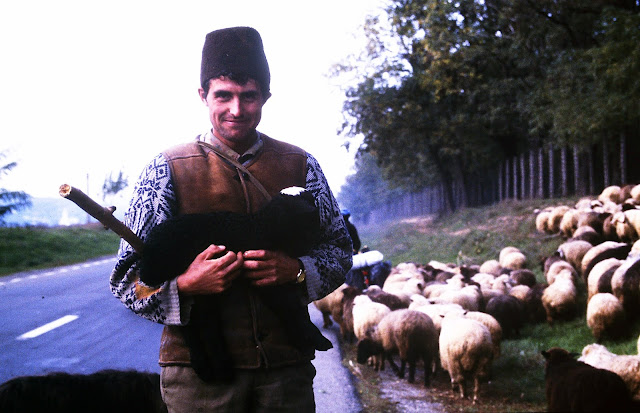 Personally, I never cared for Frank Langella’s bouffant hairdo in the 1979 flick, Dracula, but it didn’t put me off cycling the atmospheric region’s towns nestled in the midst of Europe’s most unexplored area, Transylvania.  The name alone is so steeped in pop culture that you cannot utter it without your mind involuntarily dredging up images of the orthodontally challenged undead.  In reality residents of the region show a liveliness on encountering you that you might think you could be a long lost relative of theirs so gracious and friendly are they. And it must be said that although the guy with pointy teeth is the big draw card, Romania also offers some wondrous sights aside from the vampire myth and a chance to feel like a cycling trailblazer in a country off the beaten track for bike touring. 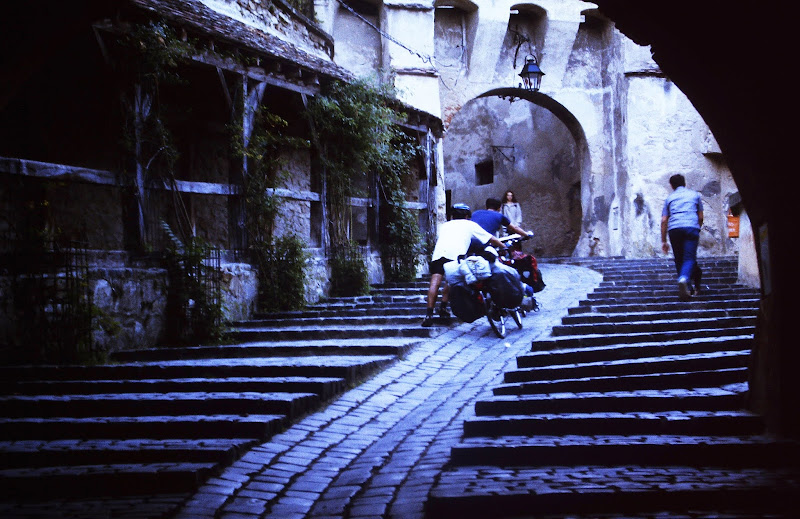 In chapter one of Bram Stoker’s vampire novel, the town Bistriţa was Jonathan Harker’s first stop in Transylvania where he spent the night at the Golden Krone, which he found “to his great delight, to be thoroughly old-fashioned”. I found it to be, well, retro maybe as it is a very huge and very ugly hotel complex from the 1970’s. The restaurant next door, where you can feast on Harker’s exact menu, wasn’t much better as it was a squat building with peeling beige wallpaper.
Unfortunately, it just wasn’t my day as the Alchemy Bar in its basement, which reportedly serves ‘Moon Wines’ was barred tight as well. After a long day in the saddle, scaling the pretty hilly landscape, this was hell on earth. Having discovered no one in the Restaurant Coroniţa, I went to inquire at the Transylvanian Society of Dracula across the road, but I found it closed (unsurprisingly at this stage) and the quote from Dracula floated into my mind, “Go anywhere, …except where the doors are locked, where, of course, you would not wish to go”.
An omen in this strange land perhaps?  The Dracula society here is busy though, arranging tours to Stoker’s model for Dracula’s castle on the Borgo Pass (not exactly true as he took his inspiration from Cruden Bay Castle in Aberdeenshire) as well as mock witch trials.  They also promote “Honeymoons at Castle Dracula for the sophisticated,” which sounded most interesting. It is true the Romania’s tourism industry is in fledgling stages but although it is a bit rough around the edges at times the scenery and good-hearted intentions make up for it all. 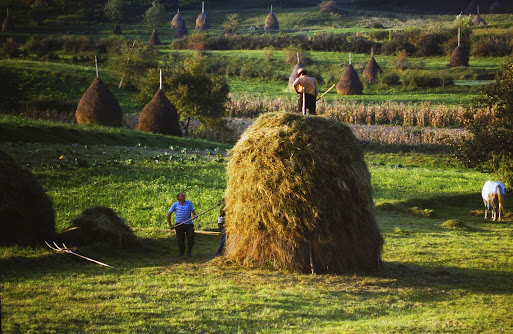 However, if you get tired of the vampire myth and associated tours, the area around takes in the Carpathian mountain chain and Bârgău Valley, a superb place for cycling with mountain passes supporting an unique ecosystem of plants and animals and a good point to travel to Bucovina’s painted monasteries. 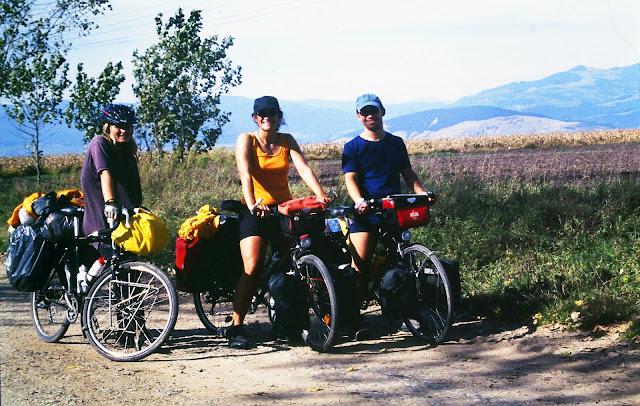 I decided to carry on cycling southwards and arrived at Sighişoara, which is a bustling place and a UNESCO world heritage site with fortified walls, 15th century merchant’s houses, and a fascinating Saxon graveyard.It is also a city, which is eager to promote its ties as the birthplace to Dracula’s real life doppelganger, Prince Vlad Tepeş (the Impaler) (1431-1476). 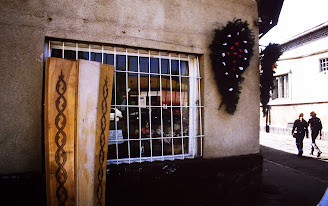 Inheriting “the order of the Dragon” (a symbol of Satan) earned his father and then himself the epithet, Dracula (son of the dragon).  Not a very nice guy by most accounts (although some Romanians believe him a hero for his staving off the Turkish forces in the 15th century), he ruled the county of Wallachia with an iron fist, but it his bloodthirstiness and cruelty, which he is most infamous for. His predilections for eating meals surrounded with the quivering carcasses of those he tortured and plunged onto stakes certainly made him a dubious dinner host. He actually lived in the city and his home now ironically is a successful upmarket restaurant  - although I hope that in the name of decency they don’t feature shish kebabs on the menu, but was told that “We do have a very popular Cabernet Sauvignon, its called ..’Vampire’ .”

Transylvania will not disappoint Cycle Tourists 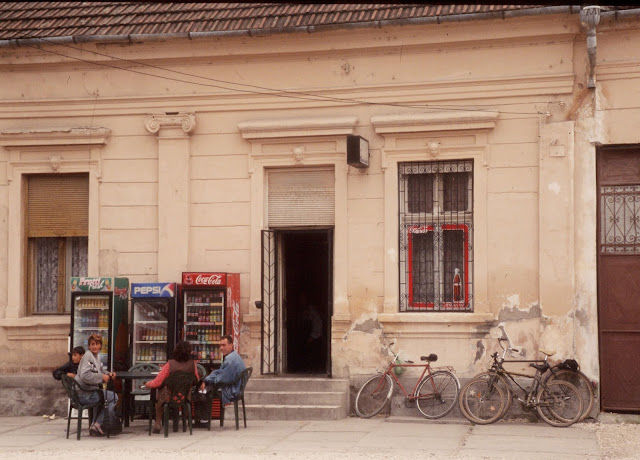 This is one town in which the phrase, “has a medieval feel” doesn’t go amiss, it has one of the most beautiful and somewhat creepy clock towers I’ve ever laid eyes on – straight out of one of Harker’s journals, its garlic bulb towers and spiky spires have an air of another era.
Fortunately, although in 2001, the municipality allowed Dracula to go Disney with the permission to build a £29 million Dracula theme park, which included a spooky castle, hotel and golf course, International pressure (headed by Prince Charles of England) dissuaded them.  Fears of spoiling this perfectly preserved town were well founded as plans to destroy swaths of natural forests for hotels, chairlifts and no doubt a string of tacky tourist shops selling fake teeth and capes had been mentioned. As it is now the attractive cobblestone square is quiet and the city walls look out towards the dark forested hillsides, which surround the town.  It is in this countryside that you really could believe the story is real as you cycle through these deep foreboding forests. 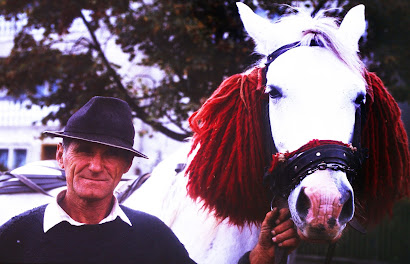 Transylvania often romantically called, “the land beyond the forest”, is still agriculturally based, and farmers work in fields using scythes and wooden tools, and in the evening huge wagons of hay crowd the roads, with every horse’s bridle carry bright crimson tassels supposedly to decorate and ward off the evil eye.  Cycling there often means being stopped by flocks of the woolly creatures.Within this tranquil setting you could forget that in places like Sighişoara, Braşov, Sibiu and Târgovişte, Tepeş had impaled tens of thousands of people at a time.

It is also easy to overlook the fact that this is a country that suffered under the megalomaniac Ceauşescu not just 12 years ago. However, this is easier to recall as Ceauşescu’s policy of systemization, which involved tearing down villages and housing citizens in bleak concrete estates blights many towns of Romania and their poverty left its mark. Although you don’t need your holy water here, a water filter kit might be handy as Romania’s environmental record is historically diabolical and some towns are pretty dire still with large chunks of the population suffering from pollution caused illnesses.

The Legacy of Dracula in Romania 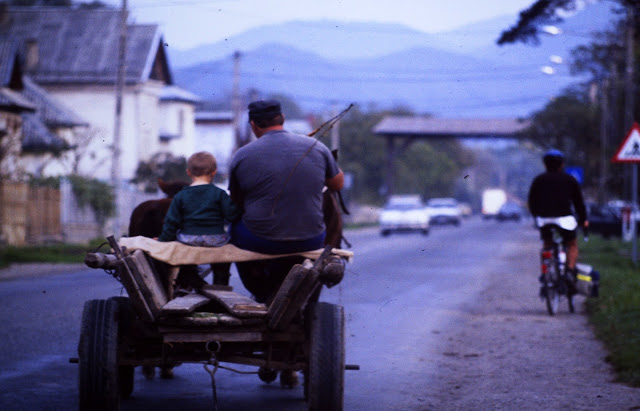 Bram Stoker, the Irish author never visited the area in which his novel Dracula is set. Instead he relied on library sources and created from these details the sustenance most of us associate with the place. The novel was actually only published in Romania in 1991 ironically due to Ceauşescu’s belief it contained too many negative notions about Romania (this is the same man who demolished much of Bucharest to build his gaudy presidential palace, exported Romania’s food to pay the national debt and made birth control illegal with ordered gynaecological exams on women to ensure their fertility).

Some of the Best Bike Touring in Europe

Unfortunately, as it would have been interesting copy, I did not come upon untold horrors (although if you count having to eat copious amounts of tripe soup, then I guess I did) nor did I see any cliff hugging haunts of those in perpetual death but, curiously, I did note that there seemed to be a proliferation of those selling coffins in most towns. But, I put that down to the vitriolic tuica brandy everyone seems to tipple here regularly and expect you to partake in. 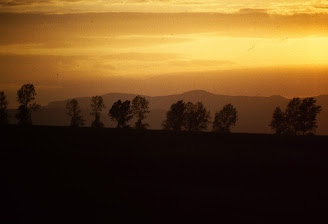 Said one grizzled man after offering us a shot from a hip flask in the dimming light of day, as we cycled through a small village to set up camp. “Ah you go to Sighişoara and Târgovişte, they are..Splendido and …Dra-cool lived there,” he said.

Later my friend remarked, “You know that just freaked me out when he said that, just like in the movies – Dra-cool…scary.”

And I must admit the hair rose on my neck too, it is just that kind of place – gritty truth with a touch of mystery. 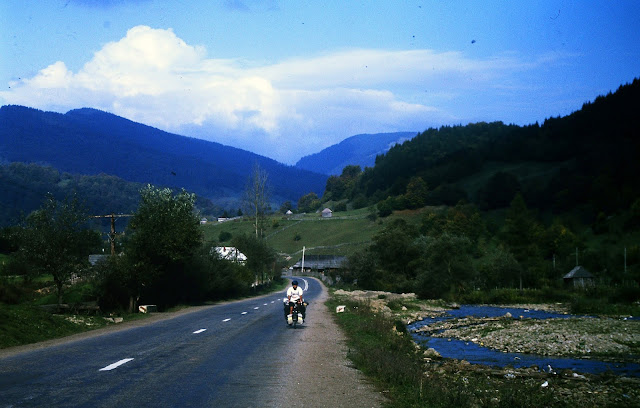